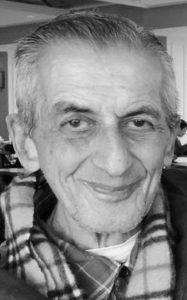 Bill was predeceased by his parents Anastasia (nee Gerassis) and Chris Christou of Lethbridge, Alberta, his brothers George Christou and Van (Helen) Christou, and his nephew Chris (Alison) Christou.

Born in Lethbridge, Alberta in 1933, Bill grew up in a vibrant Greek-Canadian community. He graduated from the Lethbridge Collegiate Institute in 1952 and attended the University of Alberta (1952-55). For many years Bill pursued training in Food Services at the Saskatchewan Institute of Applied Arts and Sciences, Ryerson Polytechnical Institute, Humber College, University of Guelph, and Sheridan College of Applied Arts and Technology, during which time he worked in magazine sales, telemarketing and food services. Until recently, he continued to work at Jake’s Warehouse with the gracious and generous support of Vic Sevadjian and his family.

Bill was known and appreciated for his diligence and hard work as an employee and in all his activities. He was loved by his friends and co-workers for his reliability, integrity and positive spirit. In his later years he enjoyed meeting friends at the Sir John Colborne Recreation Centre for Seniors and at church on Sundays. His gentle and generous nature will be missed by all who knew him.

Bill will be cremated in Oakville and buried in Lethbridge Alberta. There will be a memorial service to honour his memory at a later date.

The family extends deep gratitude to the medical care team at Oakville Trafalgar Memorial Hospital for their compassionate care of Bill during these trying times.

One Condolence for “HRESTU, William”