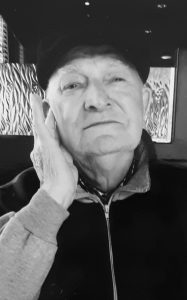 Mr. Elmer Baczuk of Lethbridge passed away at Chinook Regional Hospital on Sunday, April 26 at the age of 88 years.

Elmer was most affectionately known to his friends as Fudd, and endearingly known as Papa Bear in his later years. He was very charismatic, engaging and had an amazing sense of humor, all of which contributed to his long and successful career as a salesman.

Born in Coaldale on May 15, 1931 to John Baczuk and Mary Baczuk (Istok). He attended school until grade 8, and though his formal education wasn’t extensive, he had a head for numbers and his handwriting was quite elegant. Like most kids back in that generation, he quit school to help his family and worked full time on the farm.

By his late teens, he worked as a section man for CPR, repairing the tracks until one day his brother Bill drove up in a Canada Dry Truck and recruited him to work for them as well. This was the beginning of his career of 50 years in sales. Then Enerson’s, Ponderosa Auto and RV, and lastly Travelcraft Trailers, from where he retired in his 70’s.

As a young man, Elmer’s passions were fishing, camping, cars (65 GTO), Norton 650 Commando and Harley Davidson motorcycles, boating and waterskiing with his 2 brothers and Al Schneider at Okanagan Lake and Christina Lake in BC. Other special places he travelled and fell in love with were; Vancouver Island, Victoria, Qualicum Beach and Bouchart Gardens.

He would spend hours in his flower planters, garden and yard, taking great pride in his lawn being golf green perfect. Elmer had a huge love for animals, especially his German Shepherd Gentle Ben and Jennifer’s cat Boomer. In true Hungarian fashion, he loved to cook and equally enjoyed food.

His twilight years were spent in West Highlands Good Sams where he was incredibly well cared for and loved by their amazing staff. He lived to ride his 3 wheeled Schwinn bike daily around the lake outside his facility, greeting every dog with much adoration and every person with a kind word or flattery. He spent hours watching and cheering on his favorite curling teams, as well as the Edmonton Oilers and Saskatchewan Roughriders. Elmer lived life to it’s fullest and left a lasting impression on everyone he encountered. He will be fondly remembered and deeply missed.

As per Elmer’s wishes, he will be remembered privately by his family and friends.

For those who wish, memorial donations in Elmer’s name may be made to NOKA (No Kill Animal Association) by cheque to 728 Redcrow Blvd. West, Lethbridge, Alberta T1K 7L8, or by E-transfer to lethbridge.noka@gmail.com