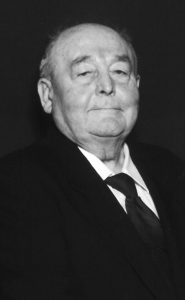 OTTO FRANZ ERICH MARTEN passed away suddenly at home on the morning of Thursday, May 7, 2020 at the age of 89 years.

Otto was born on October 24, 1930 in Prust, Pommern, Germany and was forced to flee his homeland near the end of the war. He settled in the Ruhr valley in West Germany and worked as a coal miner, where he achieved journeyman status. He met the love of his life, Maria, at a May Day dance – she was preparing to leave and he convinced her to have one dance with him. That dance lasted for 71 years; they got married five years after that first dance and continued dancing for another 66 years. Mom and dad came to Canada in 1955, with dad coming first, arriving in Canada with one suitcase full of clothes and one suitcase full of tools, convinced he would have to build his home out in the wilderness. Dad told us many wonderful stories about his arrival and first few years in Canada. After spending the first year working in Waterton, they moved to Lethbridge where dad started working in the coal mine. After the coal mine shut down, he started working for Ellison Mills. During his time at Ellison, he started up his landscaping company, Otto Marten Landscaping. Many of his projects, such as the sidewalk going to the Japanese Gardens, have stood the test of time and are still there for Lethbridge residents to enjoy. He was recognized for his work when he received the immigrant achievement award for business in 2010.

Otto loved the outdoors – he was an avid hunter and fisherman, and even when his health started to fail, he still enjoyed going outdoors and experiencing nature with his family. He was also very proud of his German heritage and his membership in the German-Canadian Club and showed it by dedicating many hours volunteering his services. He loved his German card game, Skat, and enjoyed playing it at the German Canadian Club and at home, often with his good friend Wolfgang Otto – and sometimes, their discussion over their respective strategies could be heard throughout the house!

He was predeceased by his parents Karl & Freida Marten and his siblings Kurt Marten and Irene Schulz. His life was a definition of true compassion and love. Otto was a beloved husband, father, grandfather and great grandfather and will be greatly missed by his wife, Maria, son Karl (Charlotte), daughters Connelia and Renate (Bruce), grandchildren Kris (Jodie), Karina (Boyd), Lindsay, Skye (Richard) and Iain, and great-grandchildren, Bryson, Brianna, Caderick and Dallin.

Due to the current pandemic, a Private Family Service will be held on Wednesday, May 13, 2020. The Service will be livestreamed, and it can be viewed on our website under Otto’s obituary.

One Condolence for “MARTEN, Otto”

Leave a Condolence for Karl and Susan Mueller