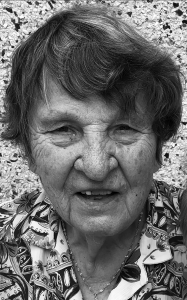 Mrs. Olga Pavlenko of Lethbridge, Alberta, passed away peacefully on May 5, 2020, at the age of 98 years. She is the beloved wife of the late Dimitry Pavlenko.

Olga was born near Zaporizhzhia, Ukraine on January 1, 1922 to a family of Kulaks. Shortly after the Russian Revolution, her family lost their farm and were displaced. They all managed to survive the Ukrainian famine, as well as Joseph Stalin’s regime. During WWII, Olga worked for a farmer in Germany as an unpaid slave labourer, to which she was thankful because even though the labour was continuously physically demanding, she said that she was lucky that she could still eat some potatoes while she picked them, and could drink the milk that she was milking from the cows. The farmer was kind to her, and she knew that others had a worse experience than hers.

After the war ended, she sought out to find her parents and siblings. After over a year, she was reunited with both of her parents in Germany. Not long after, they made their way to Belgium, where she met and married Dimitry Pavlenko and together with her parents, the four of them emigrated to Canada in September of 1950.

They settled in Coaldale, Alberta with distant relatives. Olga had her first child, Alex, on December 1, 1950, and Nick came on September 22, 1954. Olga was an amazing cook, baker, seamstress, and all-round home maker. She also worked in the beet fields and Lilydale.

Her first grandchild, Terry, was born in 1980, Angela in 1983, and Camille in 1989. Her and her husband took care of Terry and Angela every day while their parents worked, and they established and kept an incredible bond with them to this very day. She also spent a lot of time with Camille later in life when Camille lived with her during University years. Olga was an extremely cherished Grandmother who will not be forgotten.

Olga also became a Great-Grandmother in 2016, followed by an additional 2 more in 2017 and 2019. She loved those boys with all her heart as well.

Besides her beloved husband, Olga is predeceased by her son, Nick Pavlenko, parents; Kateryna and Trokhim Spitzky, her sister Katya, her brother Oleksiy, and two nieces.

A private Funeral Service will be held at 1:00pm on Friday, May 15, 2020, at MARTIN BROTHERS RIVERVIEW CHAPEL, with Rt. Rev. Father Taras Krochak clergy, officiating. Interment to follow in Mountain View Cemetery.

Due to the COVID-19 rules, the funeral will be kept to immediate family only, but for those who wish, please visit www.mbfunerals.com click on Olga’s obituary to view the live stream of the service.