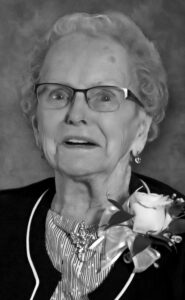 Our beloved mother, grandmother and great-grandmother passed away peacefully on May 11, 2020 at the age of 95 years.

Bertha was born March 4, 1925 in Climax, SK to Jesse and Lily (Lundberg) East. She received her early schooling in a one room country school and her high school in Orkney, SK. Bertha went on to attend Normal School in Regina, SK to become a teacher. At the age of 17, she took on her first teaching job in the Strasbourg/Bulyea area, followed by teaching high school in Robinhood before returning home to Orkney to be principal for a short time.

On January 12, 1946, Bertha married Harland Brandon, starting out married life on his father’s ranch during which time she was called to teach at the nearby country school. In 1953, they moved with two small children, Beverley and LeWayne, to the newly opened irrigation project in Hays, AB. Bertha joined the teaching staff in the Hays School in 1959, continuing to teach there until she retired in 1982. She taught many of the students in the Hays area and has been remembered well by many of those students over the years. She was a friend to education, fellow teachers, and students. She balanced praise and discipline, each year setting limits and realistic goals for each student to help them achieve their personal best. Through these years in Hays, Jeffery and Mark completed the family.

Bertha was proud to have been raised on the prairies, enjoying the western spirit and freedom that came along with that. She loved the farm life, raising a large vegetable garden and canning many jars of fruit, corn, pickles, jam and jellies over the years. Along with all of this she milked cows, raised chickens and turkeys and even found time to make her own butter, cottage cheese and homemade bread.

After 47 years of farming, Harland and Bertha retired to an acreage near Diamond City, AB in 1984 and then to Lethbridge in 1994. During these retirement years, they were able to enjoy many camping and fishing trips with friends and family as well as vacations to Hawaii, California, and Florida. Bertha was able to renew her hobbies of knitting, crocheting, wheat weaving and reading to name a few. Each Christmas she would knit slippers for each member of the family. She has continued to faithfully read the Lethbridge Herald cover to cover up until a week before her passing. She was always up on the most current events.

Bertha was a selfless person, never too busy to help arrange or participate in community and church functions. She dedicated a great deal of time to making the first Hays history book “From Sod to Silver” a reality. As Bertha enjoyed public speaking, she was called upon many times to act as the master of ceremonies for wedding anniversaries, bridal showers, and farewell parties. She was an active member of the Hays United Church, serving on the board and teaching Sunday school.

As health began to fail, Harland and Bertha moved into West Highlands Estates in Lethbridge where Bertha enjoyed many coffee parties and card games with other residents.

A Family Graveside Service will be held in Royal View Cemetery. For all family and friends who cannot attend due to the current gathering restrictions, a recording of Bertha’s service will be available under her obituary on our website between May 15 and June 14.

Donations in memory of Bertha may be made to the Heart & Stroke Foundation at www.heartandstroke.ca/donate.