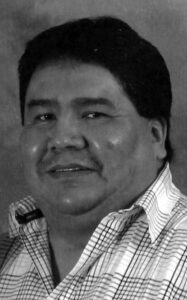 William Dale Many Bears Jr. (HONEY) passed away suddenly at the Cardston Hospital at the age of 54 years old.

Dad leaves behind the love of his life, of 37 years, Frances. His beautiful Children; Lyndon (Sonjae), Jennifer (Joey), Ryan (Larissa), Terrance, and Ellianna (his drama Queen). His precious baby bears; Maria, R.J., George, Madison, Lexus, Willy, Brielle, (his sparring partner) and the newest member, Diamond. Parents; William Many Bears Sr. and Fanny White Feathers Siblings; Irene, Joe (Gail) and Wesley Weasel Fat. Adopted children; Braydan, Sierra Skye, Alfreda, Travis, and Justin. God children; Kirsten, Sam, Daylin, and Shelby. His mother in law Odile, sister in law’s Noreen and Donna (John). brother in law’s, Delroy Oka, Darryl (Linda), Wendall (Karen), Sheldon (Tammy) and Roy. And the rest of the Young Pine family. Our dad was also known as “Fatman” due to his chubbiness as a baby. Our dad travelled with his dad for hockey and rodeo. He played hockey with the Ranchland Kainai Braves Senior Men’s Hockey Club and the Golden Chiefs. On the ice, he was known as an enforcer and earned the nick name ‘Semenko’. He could hit, skate and score. A well-rounded hockey player. At a Gleichen tournament he won all star and MVP, and many more as his trophy collection speaks volume of the awesome hockey player that he was. He was the first one to ride ‘Beavers’, an un-rideable bull. Dad was invited to the URIA (United Indian Rodeo Association) finals to represent Canada when he was in high school in Malta, Montana. When he played hockey, he was scouted by the Calgary Wranglers (WHL). If it wasn’t for a groin injury, he got during a bull ride, who knows the places he would’ve gone. Dad also played Fastball and later Slow pitch with his love. When dad’s oldest son Lyndon started playing hockey, he hung up his skates, to which his bros gave him a hard time and told him he was ‘hen pecked’. This made his decision that it was Lyndon’s turn to thrive in sports. He coached his son Lyndon’s team along with Chester D. Chief, and Rumpa B. Water for many years and with this, the team won many championships, including a win at the Native Provincial Hockey Championship in Edmonton, Ab. (Eagle Division-1997). Also, in the same hockey season, winning a Provincial Championship for the regular season Tier 4 League in Caroline, Alberta. Our parents love started as secret admirers when they were very young. Dad promised mom that he would propose to her as soon, they could secure their forever home. They were married on September 21st, 1991. Together they raised their family full of love, and now their precious babies by the Belly Buttes. Dad loved and cherished his family so much that, he would do anything for them. And with this he decided that he would take time off from work, to help raise his babies. Dad and mom took us children on many road trips, weather it was for hockey or a family vacation; To BC, Grand Canyon, Las Vegas and to the Happiest place on earth (Disneyland) as dad would say, San Diego Zoo and Sea World on three seperate occasions. Just to name a few. Dad loved going with our mom to concerts, Bingo, playing Casino and spoiling our mom with flowers and fine pieces of jewelry as well as letting mom shop to her heart’s desire. He loved all his baby bears, as he would call them. He enjoyed watching them whether it be hockey, soccer, lacrosse, ringette and powwow (although he was never one to go or participate in). He was a very quiet humbled mannered man who enjoyed listening about his grandchildren’s daily routines. Always breaking the ice with his funny jokes and good-humored personality. His kids looked up to him and will be missed having morning coffee’s sitting on the deck. He was so proud of them and their accomplishments. Whenever one of his grandkids needed to be brought somewhere for anything, he did without hesitation. Dad had shared a special bond with his Mad Madie, and Willy. He would take Madie to the Belly Buttes and never go without her, as this was their spot. Madie will sure miss his hash browns with the secret ingredient, no one could make them like him. And all the adventures he took them on. Our dad/papa has left a huge HOLE in our hearts. He worked hard all his life to provide for his family, as his dad told him “Fatman you need to get out there and work now that you have a little family” and with that. His career started him on the following jobs. Blood Tribe Housing, ATCO housing in Calgary Ab, Blood Tribe Fire and Emergency, firefighting, Dwyer Fox Construction (working on the canal), SRI Homes, Treaty 7 Housing. He was predeceased by his paternal grandparents; George and Irene M.B., Uncles; Brian M.B.; Sibling; Wilomena; Nephew; Jamie B.R. Kelsey W. C. Niece; Ariel M.B. Maternal Grandparents; Fred and Beatrice W.F.; Uncles; Ralph, Gilbert; Auntie; Rosella B.P.; Uncle; Bernard T.M. Mother in law, Annie Thersa, brother in law’s Delbert Y. Pine, and Edmund W. Child. As well as his best man Kevin Vielle. Dad’s family consists of the following; Many Bears, Mistaken Chiefs, Old Shoes, Great grandma White Man, Wells, Many Grey Horses, Weasel Fat, Day Chief’s, Healy’s, Tall Mans, and his Love’s side of the family. William will be deeply missed by all. A Private Family Service will be held at Legacy Funeral Home, Cardston on Friday, May 15th at 12:00 p.m with a viewing from 10:00 – 12:00 p.m. Due to COVID -19 Restrictions a limited number of people will be allowed into the service. Dad will be laid to rest in the Many Bears family plot.