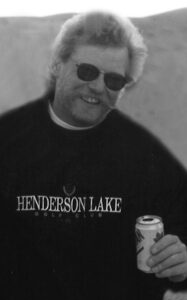 It is with great sadness and heavy hearts we announce the passing of Kenneth James Klinkhammer of Lethbridge on May 5, 2020 at the age of 66 years.

Ken was born on April 24, 1954 to Bernard and Yvonne Klinkhammer in Lethbridge. He attended St. Patrick’s elementary school and Catholic Central High. Ken was a Journeyman Electrician and worked for D.A Electric for many years before his retirement.

Ken was a good athlete and loved all sports, especially hockey, golf, pool and NFL football. He was an avid golfer at Henderson Lake Golf Club and enjoyed playing in the Men’s Scramble tournaments.

Hockey was also a great passion of Ken’s, he was a very good hockey player and was on the 1975 Lethbridge native sons hockey team when they won the gold medal in Canada Winter Games. This summer the team will be inducted into the Alberta Sports Hall of Fame.

Ken played pool with many leagues and loved watching and talking about NFL football, he kept stats on every team, a habit he learned from his Mom.

Ken was a kind, gentle soul who never hurt anyone and had many friends. He could be found at Pop’s Pub, Beaches or the Flamingo having a beer with his buddies, always quick to laugh and solve the world’s problems. With Kenny you would be talking sports, telling many stories and then laughing and crying at the same time, such a special person.

Ken was predeceased by his father and mother, Bernard and Yvonne Klinkhammer as well as his brother Donald Klinkhammer.

Due to COVID-19 a private family burial has been planned. When restrictions are relaxed, the family would like to invite family and friends to have a beer on Kenny to celebrate his life, share memories and imagine him pointing his finger at you and saying “Love you, don’t ever die”.

For those who wish, memorial donations in Ken’s name may be made to the Heart and Stroke Foundation of Alberta Box 2211 Lethbridge, Alberta T1J 4K7.