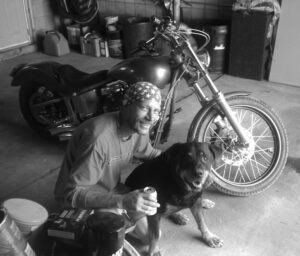 Todd was born in Lethbridge, AB and raised in Picture Butte, AB. As a young man, he was passionate about building model cars, racing, greenery, fishing and cooking.

As Todd grew older, he wanted to live somewhere other than the flatlands of Alberta and decided to venture off to B.C. He called Burnaby, BC home for next ten years before moving back to AB.

Todd was a perfectionist at everything he did and in his spare time would often go fishing, doing odd jobs for someone or just simply working on vehicles. Cars were his passion and that’s when a close friend of his asked him to be his pitman while they raced out at Bridge County Raceway. He also volunteered at the Shaughnessy Community Centre and if anyone ever needed help, you could always count on Todd to be there to lend a helping hand. He also loved to cook and get you to eat the new dishes that he thought he’d try. Some of the concoctions he’d come up with were pretty interesting and make you shake your head at, but man did they taste good!

A Celebration of Life will be announced at a later date.

At the family’s request, in lieu of flowers and in memory of Calvin, please consider a donation to The Shaughnessy Community Association, Box 22, Shaughnessy, AB T0K 2A0.

One Condolence for “RENNING, Calvin”