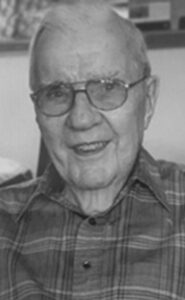 DONALD THURLOW passed away, in his 94th year, on May 13, 2020 at Chinook Regional Hospital after a short hospitalization.

Donald was born and raised on a farm near Travers, Alberta. The youngest of six children, he attended the Kasimir School near Enchant, and Starline High School near Barons. After he finished school, Donald spent the rest of his life in Lethbridge. Many older farmers will remember Donald from his many years at General Farm Supplies.

In 1948, Donald married Ellen Ridley. They had two boys, Melvin and Lynn. Their marriage ended with the untimely death of Ellen in 1980.

Love came calling again, and in 1981, Donald and Betty Makin were married. Their marriage brought Betty’s daughters, Arlene Makin and Linda Radic into the family. Sadly, Betty passed away in 2013.

In addition to the children mentioned, Donald is survived by his sister-in-law, Eileen Thurlow, 94 years young, and many nieces and nephews, mostly living in and around southern Alberta.

Since we are still under the challenges of isolation due to Covid-19, there will not be any visitations. At a later date, the immediate family will have a private gathering to celebrate Donald’s life.