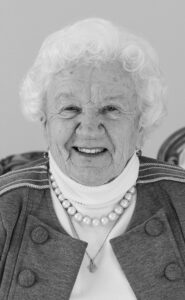 OLGA ROSE KLEIST, beloved wife of the late Byron Norman Kleist of Iron Springs, passed away peacefully at the Citadel Care Center in St. Albert, on May 19, 2020 at the age of 95 years.

She was born May 5, 1925, to Walter and Mary Chervenka. The family immigrated to Canada when Olga was six years old.

Her love for planting started at an early age, when the family homestead in Sunnybrook, Alberta. They pioneered farmland and later moved the family to Southern Alberta. Olga was the oldest of six: a sister Mary, brother Stanley, brother Joe, sister Emily and brother Charlie. She always had a deep nurturing spirit caring for others. During the winter months, as a teenager, Olga found a job working at the Crowsnest Hospital. In the kitchen she helped prepare special meals for the patients. She worked alongside the Hospital Dietitian as an Aide. Her skill propelled her to a special love for cooking. Later she would host large parties for family and friends and serve up incredible gourmet meals.

She married her first husband Tommy Joss and had two beautiful daughters, Angie and Sandra. Years later she remarried her second husband, Norman Kleist, and lived on a farm in Iron Springs raising 600 turkeys and countless other birds and animals. Olga and Norman retired from the farm life and moved to an acreage north of Picture Butte where she pursued her interests. Sewing and quilting among many other crafts, nothing was too big or small.

But the love of planting and beautiful gardens took center stage. Her remarkable design skill displayed an array of flowers that showcased incredible colours that attracted people far and wide. The flower arrangements that represented Canadian flags, Southern Bells and Gentlemen were just a few of the beautiful presentations. People would be in awe dropping in as they drove by the acreage in admiration. She proudly invited them in for a drink and a sweet. Extremely accomplished, Olga’s green thumb won many local competitions through the Community Horticulturist Society. Olga’s landscape presentation sparked interest in others as she eagerly explained the do’s and don’ts.

Olga lived life to the fullest through simple pleasures; gardening, cooking, crafts and spending time with her family and friends. Olga was also spiritual, involved in many activities with the Catholic Church. Her huge generosity helped many. She had a bright energy and a contagious smile that lit up a room. Many of the Seniors and Nurses at the Citadel have funny stories about Olga. She loved to dance, she played her old LP’s on her record player and tried convincing her grandchildren to do the waltz or polka.

The greatest pain a mother can endure came on August 20, 2013, when Angie, Olga’s oldest daughter passed away. Angie took with her a piece of Olga’s heart that could never be replaced.

A beloved daughter, wife, mother, nana, and great-nana, they all treasured her. She will be deeply missed by all who knew her and loved her. Olga’s legacy will live in a small place in all of us.

A Private Funeral Mass will be celebrated at Our Lady of the Assumption Catholic Church, with Interment to follow in Mountain View Cemetery.

One Condolence for “KLEIST, Olga”