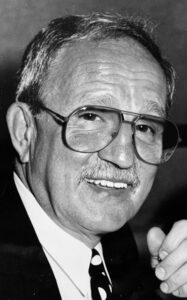 Jim was fiercely proud of his Greek heritage. He was born to Greek immigrants Chris and Helen Spoulos at the Lethbridge Galt Hospital and was named Socrates. His Irish godmother thought he should have a more Canadian sounding name, so he was called James. Later in life, he was commonly known as “The Greek” or “Jimmy the Greek”. He also claimed fame to the self-appointed names, “Spiker Spoulos” for volleyball, “Sticky Fingers Spoulos” for football, and either, “Canvas Back Spoulos” or, “Twinkle Toes Spoulos” for boxing, depending on whether he won or lost his match. “Canvas Back” once fought Rufus Goodstriker for the Alberta Championship and upon waking up in the dressing room asked, “DID I WIN?”.

During the war, Jim rode his bike out to the Prisoner of War camp to deliver newspapers and had many tales to tell of the goings on out there. As a young man Jim worked in his father’s store, the Roxy Hat Shop and Haberdashery. He later worked at McGuire’s Men’s Wear until he and his two partners, Burt Eccles and Scotty Duchan, opened Gentlemen III Menswear in 1970, where friends and customers endured his sarcasm and wit. He continued this legacy by teaching his grandchildren the fine art of verbal abuse.

Jim was active in many service clubs including Kiwanis and the Y’s Men Club. Jim retired from the clothing business in 1999.

Jan and Jim loved to travel and had the most romantic adventures in such places as Istanbul, Cypress, Israel, Rome, the Greek Islands, Ireland, Costa Rica, Mexico, and the Caribbean. Through thick and thin, they were a team, and had a marvelous life together. After a health crisis in 2003, Jim and Jan limited their travels mainly to Palm Springs.

Jim died a happy man at home on May 20th. He was most content in his home of 35 years surrounded by his loving family. Jim was predeceased by his son, Christopher Spoulos (1981) and his brother, George Spoulos (2010). He is survived by his dedicated and loving wife Janet of 35 years, his four blended family children Cathy (Chris) Flexhaug, Doug (Bev) Spoulos, Shawn (Carrie) Sakamoto, and Sasha (Scott) Mahan. His fabulous grandchildren, Jamie (Jordan) Layton, Jarrod and Jordy Flexhaug, Nick Kern, Carly and Carissa Spoulos, Parker, Quintin, and Lennon Sakamoto, and Lachlan and Cadan Mahan. He is also survived by three great grandchildren, Zephaniah, Eli, and McKinley Layton. Also, one niece, Wendy McDonald and two great nephews, Joseph and Jack McDonald.

Due to the COVID-19 Pandemic, there will be no public funeral. A private celebration of life will be held for immediate family only.

P.S. Sure hope heaven can handle him!