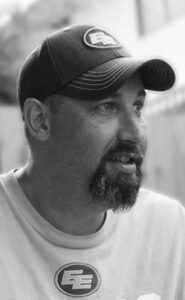 DARRIN ROBERT BURKE BOURNE, of Lethbridge, passed away peacefully in the St. Michael’s Health Centre Palliative Care Unit after a courageous battle with brain cancer, on Friday, June 5, 2020 at the age of 45 years.

Darrin will be lovingly remembered by his parents Arlene and Wade Bourne, sister Renee (Geoff) Oster, nieces and nephews Michael, Victoria, Jessica and Joshua, grandmother Jennie West and his son Hunter as well as numerous aunts, uncles and cousins.

He was predeceased by his grandparents Donna and Bob Bourne and Frank West, uncle Sam West, aunts Kristine Derksen and Deanna Tilari and cousins Chelsey West and Kyle Yazlovasky.

Darrin was born on June 21, 1974 in Calgary, Alberta and lived in Spruce Grove until he was 6, when he then moved to Lethbridge and lived his life to the fullest and resided until his passing. Darrin was an avid soccer player for most of his youth and spent many years throughout his early adulthood boxing. Darrin was a very committed football fan who never missed an Edmonton Eskimos or Green Bay Packers game.

Darrin was very passionate about his family and friends and enjoyed spending time with them. This included family dinners, attending hockey and baseball games, and watching movies on the big screen. Darrin was the storyteller and comedian of the family and was always telling jokes and making everyone laugh right up to the end.

He will always be remembered through his humour and the many stories there are to reminisce about. Darrin will forever be loved and remembered.

A Funeral Service for Darrin will be held on Thursday June 11, 2020. Due to capacity restrictions, attendance is by invitation only.