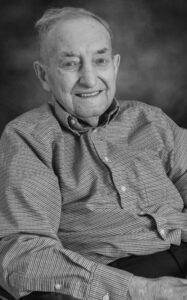 Mike was born on September 27, 1921 to his parents George and Agnes Slovak in Csanadapaca, BekesMegyae, Hungary. In 1929 Michael traveled to Canada with his parents and sister arriving in Lethbridge Alberta. He lived in the Picture Butte area and worked in the beet fields. Mike attended Hemp Hill Diesel school in Vancouver after he finished eighth grade in Picture Butte at the age of 17. Here he learned many things about diesel mechanics and engines. In 1948 he purchased the farm in Wrentham. He married the love of his life Bette on September 18, 1954 in Lethbridge at St. Andrews Church. They farmed there until 1965 when they moved to the farm in Claresholm. Together they raised three beautiful children Lorna, Ken, and Tom. Mike was active in both the Claresholm and Wrentham communities where he helped in the United Church, Scouts, and Brownies, and School Board and helped build the community church in Wrentham.

One of Mike’s crowning achievements was building the house on the farm in Claresholm. Together he and Bette hosted many family gatherings that were enjoyed by all. Mike enjoyed life on the farm, swathing and seeding were his favorite seasons. He could be found out on the tractor well into his old age happily working away.

Mike also enjoyed his grandchildren, from delivering lambs to Gord and Bev in the trunk of his car to playing Lego and Lincoln logs with Michael and Brady. To carefully holding each of the great grandchildren as they arrived and singing and playing with them.

Waiting in Heaven for Mike are his parents and sister Kathleen, and granddaughter Sarah.

The family respectfully asks that donations be made to the Alzheimers Society – 7015 Macleod Trail SW #800, Calgary, AB T2H 2K6 or the Claresholm Health Foundation – Box 2638, Claresholm, Alberta, T0L 0T0 in lieu of flowers.

Condolences may be made at www.zentnerfuneralhomes.com

One Condolence for “SLOVAK, Michael”