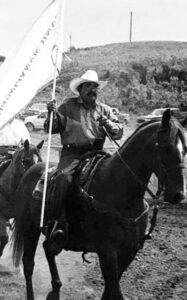 Buck was born at the Blood Indian Hospital to Kate and Frank Many Fingers on April 20th, 1944. He was the first boy born to Kate and Frank whose family already included Clothilda, Virginia, and Geraldine (Gerri), but soon came Franklin (Gabby), Anne, Jordan (Jake), Ivan and Brent. Buck grew up with his family in Fish Creek, on the west end of the Blood Reserve, and continued to live there until his passing. He did leave to attend Hill Spring for many years before attending school at St. Mary’s Residential School and then in grade twelve he was in Calgary. Buck was a gifted athlete playing basketball and football but he was an avid cowboy in the rodeos, especially loving to compete in bareback. Buck was born to be a real cowboy from breaking and training horses, taking care of cattle on the back of his horse, and able to fix just about anything with what he had. He was known to be a hard and tireless worker, a great and humorous storyteller, both generous and kind, and a great neighbor and a friend to so many. Buck is survived by his siblings Virginia (Lester) Tailfeathers, Gerri (Don) Many Fingers, Anne (Rod) Healy, and Ivan (Verna) Many Fingers. He is also survived by his nephews Rick and Todd Soup; Bill, Kelsey, and Jim Tailfeathers; Kirby and Colin Many Fingers, Ross, Cory and Dorin Holland; Shawn and Chad Healy; and Wade and Terry Many Fingers. And he is also survived by his nieces Esther and Ann Tailfeathers; Bonnie, Tracy and Susan Healy; and Lynette Scott. He also has many great nephews and nieces, everyone loved Uncle Buck.

Buck’s funeral will be held in Cardston, Alberta on Thursday June 18th through Legacy Funeral Home.

3 Condolences for “MANY FINGERS, Adrian”