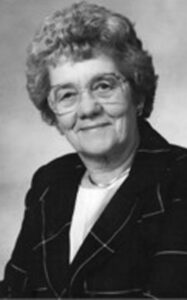 Mrs. Isobel Paterson of Lethbridge, beloved wife of George Paterson, passed away peacefully on Sunday June 14, 2020 at the age of 96 years.

Isobel was born and raised in Pope, Manitoba. She achieved her Registered Nursing degree at the Dauphin General Hospital in 1947. Isobel and George moved to begin farming west of Rimbey, Alberta in 1954.

Isobel began nursing at the Rimbey General Hospital in 1962 and later became the Director of Nursing. Helping others was Isobel’s true calling in life, and she loved everything about her nursing career.

After George passed away in 1992, Isobel moved to Lethbridge, Alberta to be closer to her family. She made many new friends in Lethbridge, but she really enjoyed any opportunity to get together with her family, particularly the grandchildren.

Isobel was predeceased by her sons Lyle (Val) and Raymond (Carol) Paterson.

The family would like to give special thanks to the staff at Lethbridge Extendicare Fairmont Park for their wonderful care of Isobel during her final days.

A celebration of Isobel’s life will be held at a later date.

Flowers are gratefully declined. If you would like to make a donation in Isobel’s name to your local Food Bank, that would be very much appreciated.