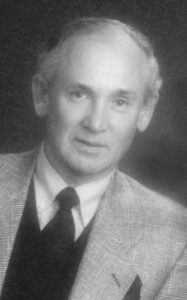 On Tuesday evening, June 16th, surrounded by his loving family, Jim Spenceley slipped away peacefully at home after a long battle with dementia. His family takes great comfort in knowing that Jim lived life to the fullest, always.

Jim was born on December 30th, 1934 in Pembroke Ontario. Jimmy was a smaller kid but made up for his diminutive stature with energy and wit. School bullies would stay clear of him; he could hold his own in any scuffle. And if that failed, he always had his big sister Mary to back him up.

Jim was always the entertainer. He could tell a joke better than most, and if you looked around a room for him, you just needed to find the group of people laughing the loudest. He loved traveling with his soulmate and best friend Lynda—especially when they celebrated the birthday they shared: December 30th. This celebration was often in the company of family on the slopes in Whitefish Montana, where he could mostly keep up with sons Rob and Bill, on even the steepest terrain.

Jim was also an avid train buff, spending many hours watching trains with his grandson Ted, and building the most detailed model trains—the ‘train room’ at the Spenceley home featured a scale model of the Orient Express (and he and Lynda traveled on the real Orient Express in one of their many trips together). A talented musician, Jim was accomplished on the piano. In his younger days when his kids were small, he and his pals would jam in the basement, keeping Bill and younger sister Susan awake til the wee hours! This talent stayed with Jim even when he had lost so much. He was playing his famous ‘boogie woogie’ and Christmas carols for family and friends as recently as this past Christmas.

Jim was a plastics engineer and developed his skills in the lab at Union Carbide and DuPont Canada in Kingston, Ontario. In 1973, a move out to Lethbridge landed him an opportunity–a new job as manager of product development with a young company called Flexahopper Ltd. Only a few years later he would become a shareholder and he continued to grow and diversify the business into an international company serving sizable export markets. In 1986 he and his oldest son Bill bought out the remaining shareholders and changed the name to Flexahopper Plastics Ltd., and a proud family business was born. He traveled a great deal for business, and participated in trade missions to Ukraine, the Middle East, Southeast Asia, and Australia. Jim retired in 1995, and he and Lynda were then able to enjoy the colder months in Southern California playing golf and entertaining friends. Jim and “the Bandits” enjoyed many rounds of golf at PGA West, and he did the same here in the summers, with his hometown buddies at the Lethbridge Country Club.

In compliance with public health directives, Jim’s family is planning a Celebration of Life later this year.

In lieu of flowers, those who wish to honour Jim’s memory are encouraged to donate in his name to the Chinook Regional Hospital Foundation: www.crhfoundation.ca