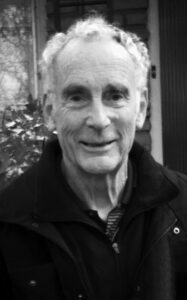 The family of Dr. Michael Pratt sadly announce the passing of their beloved husband, father, and grandfather on June 17, 2020, at the age of 82 years.

Michael was born in Foochow, China to missionary parents, James and Kathleen Pratt. As a toddler, he fled China with his mother during the Chinese / Japanese war back to England where he grew up with his two younger brothers, David and Tim.

He attended the University of Manchester Medical School where he met his future spouse, Edna, also a physician. They were married for 60 years.

After working in the UK for five years, they emigrated to Rivers, Manitoba in 1967 before moving to Lethbridge in 1969 where they raised their three children: Rob, Andrew, and Catherine.

Michael worked at the Campbell Clinic as a GP Anesthetist and GP before moving to the Bigelow Fowler Clinic.

He was an award-winning gardener and served on the executive of the Lethbridge Horticultural Society. He was also passionate about building and flying model airplanes with the Windy West Society. Travelling was another joy for him, and he visited many exciting locations. He also participated in many local fun runs and loved spending time with his two grandchildren: Christopher and Laura.

Michael will be privately remembered by friends and family.