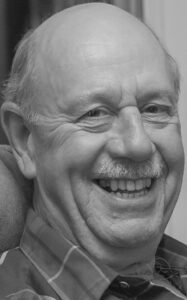 James (Jim) Alexander Trebble passed away peacefully on June 22, 2020, after a short illness. He is survived by his wife, Una Ridley, of Lethbridge; his sister Marlene Best; his children Scott (Laura); Mark (Shawna); Lesley; and Sandy (Vanda); and numerous grand and great-grandchildren. Jim was predeceased by his parents Bertha and Alexander.

Jim’s parents were long-time immigrant residents of Saskatoon and Kindersley, SK. His father Alex was known as the “one-armed” Sheriff and his mother Bertha worked at a local dress shop.

Jim began his adult professional life in Lethbridge in 1959, where he worked as a salesman at Dunlop Tires, earning $63/week. During later years Jim achieved his B. of Arts in Education (University of Calgary) in 1967; and a Masters of Education degree (University of Montana) in 1973.

Jim began his teaching career in the 1960s at Central School in Lethbridge as assistant principle until it closed. He then taught at Senator Buchanan Elementary until he retired in 1989, where he was affectionately known as “Mr. Trouble”. Jim was a strong and active member of the Alberta Teachers Association (ATA) over these years.

Jim enjoyed over 30 years traveling the world with friends and family, and reporting to ‘his office’ at the Lethbridge Country Club where his signature plate ”VANGOLF” was a familiar sight, especially each and every Tuesday. He was a loving and cheerful soul and will be missed

As per Jim’s wishes, there will not be a service. A private family ceremony will be held at a later date.

The family would like to thank the staff at Martha’s House for their friendly loving support for Jim and Una, particularly during Jim’s illness; home care and medical staff for their skill and sensitivity, and most particularly Darlene Sutherland for her friendship and devoted care of Una.

Leave a Condolence for Patricia Robinson