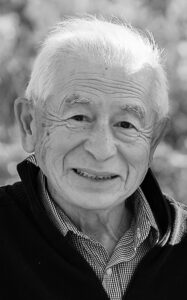 We are sad to announce the passing of Sab at the age of 88 after a short experience with pancreatic cancer.

He is survived by his wife of 42 years, Kiyomi, son Andrew (Kim Walker), daughter Holly (Scott MacMillan), and grandsons, Sam, George, and Alfie.

He also leaves to mourn, surviving siblings George, Nobby, Harold (Julie), and Kay, sisters-in-law Emily and Naomi, brothers-in-law Alan and Gary (Carole), as well as many nieces and nephews.

Sab was born on September 24, 1931 at Vancouver Cannery, Eburne (Sea Island), BC. During WWII, his family was relocated to the interior internment towns near Slocan, BC. In 1946, the family moved to the sugar beet farms in Turin and Taber. He graduated from Taber High School, and in 1951, his family moved to Lethbridge. He was employed as an accountant at Fleming Motors for almost 40 years, eventually becoming a part-owner until his retirement.

Sab was a member of Henderson Lake Golf Club since 1956, getting in over 100 rounds of the game that he loved every year until his last. During the winters, he spent time curling with the Lethbridge Curling Club.

Above all else, he valued his family, and was proud to know that he had close relationships with all of his Kamitakahara, Kobayashi, and Matsuno relatives. He enjoyed his many friendships, and was always generous with his time.

A small private family service will be held. Due to Covid-19 concerns, a reception for friends and other loved ones will be held at a later date.

Our family would like to thank Dr. Walsh, Dr. Boora, Dr. Roth, Dr. Hundal, Dr. Kwan, and all of the kind nurses who were involved in his care. We gratefully decline flowers or koden. Donations may instead be made in his honour to a charity of your choice.