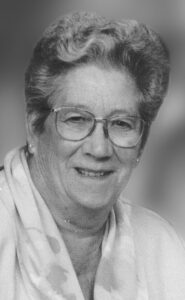 It is with great sadness that we announce the passing of CLARA HAMMERSTEDT, beloved wife of Ole Hammerstedt, at St. Therese Villa on Monday, July 13, 2020 at the age of 91 years.

Clara was the daughter of Agnes and William Nicholls, born on April 28, 1929 in Richard, Saskatchewan. She attended school in Winnipeg, Manitoba. Clara met Ole through her girlfriend Audrey and they married on September 3, 1949 in Winnipeg, Manitoba. They moved to Lethbridge in November 1966 and then spent a few years in Taber, before moving back to Lethbridge where she resided until her passing.

Clara loved to camp, fish and gather with family and friends. She was a wonderful cook, especially when she made her roast beef and Yorkshire pudding dinners.

The family would like to thank the staff of St. Therese Villa for all their kindness and support during Clara’s time there.

A Private Family Service will be held at a later date.