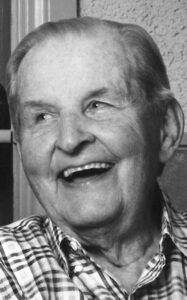 Ernest Edward Block of Lethbridge passed away suddenly on May 13, 2020 at the age of 94.

Ernie was born in Medicine Hat to Marie and Gustav Block on March 15, 1926. He grew up in a home with musically talented parents and became a multitalented musician at an early age, mastering numerous instruments throughout his life.

Although Ernie was best known for his musical abilities, he had many athletic abilities as well and was an avid sports fan of baseball and hockey. At the age of 17 years he was making a name for himself in baseball and was professionally scouted but chose to continue with his academic and musical interests.

Ernie graduated from Alexander High School in Medicine Hat and went on to get his teaching degrees at the University of Alberta and University of Missoula. He taught for a total of 35 years. He was the first Grade 8 typing teacher at Hamilton Junior High in Lethbridge for 29 years until his retirement.

His retirement from teaching allowed him to devote himself to his passion – music.

Ernie was involved in music from an early age. He had his own orchestra from the early 50s to the early 60s – The Ernie Block Orchestra. He started with the Lethbridge Big Band in 1963. Throughout his musical career he also participated in the Lethbridge Playgoers and Lethbridge Musical Theatre. He played in many different bands in Southern Alberta. He was an accomplished musical arranger (wrote his first arrangement at age 12) and copyist sharing his arrangements with many in Canada and the U.S. Ernie enjoyed volunteering his time helping with the Junior high and high school Jazz bands at lunch or after hours. He jokingly would say he “never had a day off”

Ernie received a tribute from Lethbridge Jazz Society for outstanding contributions to the Music Community of Southern Alberta for 50 years.

Ernie had a very upbeat personality and loved to acknowledge his appreciation of music. In his later years he would attend concerts and productions and marvel at the talent that was right here in Lethbridge.

At the time of his passing, Ernie was still actively involved playing bass with the Herb Hicks quartet as well as playing with the Dixieland band for the Horse Races at the Rocky Mountain Turf Club. He was looking forward to the next gig at the Mocha Cabana and for the Horse Racing to start up again.

Ernie was still living independently in his own home, driving his own vehicle, (one of the oldest members of Alberta Motor Association) and was looking forward to a regular tee time at the Lethbridge Country Club. During his 44-year membership he had scored 2 hole in ones.

Ernie touched many lives and as much as the family would enjoy a public gathering to honor his memory, due to Covid restrictions we are unable.

A private family service will be held, and a public Celebration of Life will be announced at a later date when restrictions are lifted.

The funeral service will be recorded for all to view on Martin Brothers obituary website. https://www.fhwebsites.org/ymb/ymb/obituary/Ernie-Block.

One Condolence for “BLOCK, Ernie”