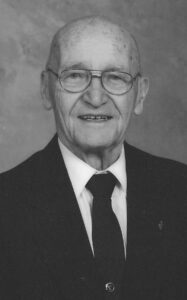 A man of faith, conviction and family values, the Rev. Kenneth Oswald passed away peacefully Friday evening, July 17, 2020 in Lethbridge, Alberta. Kind and soft-spoken, he was committed to the service of others. His accomplishments are present in the lives he touched, the compassion he showed, and the example he set for all.

Born in Lethbridge, AB on August 13, 1934 to George and Mary Morden Oswald, Ken was the second of ten children. He developed an early aptitude for auto mechanics and a love for Dodge cars while working with his brothers and Dad at the family garage. In his early teens, he was recognized by the Boy Scouts Association of Canada for his quick thinking and actions in rescuing two girls from drowning in the coulee just north of Warner, AB.

In July 1959 Ken married Florence Ostby, daughter of Clarence and Belle Bannen Ostby – the girl next door. Florence was his rock, his loving companion and partner in ministry until her death in January 2008.

Educated at Hillcrest Bible College and the University of Alberta, he began his career working at the Bank of Commerce. He soon realized that his passion was the Ministry and served congregations in Ontario and Alberta before moving his family to North Dakota in 1968. As an ordained minister with the United Methodist Church he had a long and rewarding career serving several different parishes in both North and South Dakota. Highlights of his career include involvement at Lehr Camp, working with hospice programs, and mission trips to Haiti and Israel.

He was so proud of being recognized in 2009 with a certificate acknowledging his 50 years of active service to the church. Throughout his career, he and Florence developed many cherished friendships, drawing strength from those connections and relationships over the years.

After retirement Ken and Florence settled in Lethbridge to be near family and friends. During that time, Ken continued to volunteer his time providing pastoral care. Thoughtful and with a resolute foundation of service, nothing gave him more pleasure than to share the word of God, whenever he was called.

Preceded in death by his wife, Florence and his parents George and Mary Oswald. He is survived by his children, Lowell and Lavine, who will strive to carry on his legacy, and have gratitude for the upbringing and values instilled in them by their loving parents.

He was blessed by his daughter-in-law, Bonnie Oswald and son-in-law, Alex Shapiro and the richness they brought to his life. Ken was incredibly proud of his grandchildren Jacob and Joshua, constantly impressing on them the importance of honesty, integrity and following the rules.

During this especially challenging time, the family wishes to express their thanks to the staff at St. Therese Villa and a very special thank you to Dr. Mark Horne.

With the current restrictions in place, a private graveside service will be held for immediate family. A Memorial Service will be held at a later time and will provide an opportunity to gather to celebrate a life well lived. Contributions in Ken’s memory may be made to a charity of your choice.