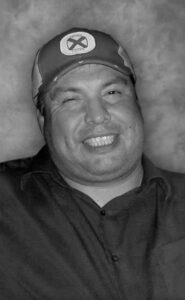 BLAKE STANDING ALONE, (Naatotak Isksaaksin – Medicine Wheel) beloved husband of Wendy Standing Alone and father of Dylan, Sela, Dakota and Julia, passed away at the Chinook Regional Hospital on Wednesday, July 15, 2020 at the age of 52 years.

On January 2, 1968, Blake was born the second youngest child to Pete and Hilda Standing Alone. Pete would always say that everyone comes to the world with a gift – Blake brought with him outstanding athletic talent, a mind with focus for great work ethic and a caring, kind, humorous soul. Blake had the ability to connect with people of all ages – even if he did not know you well, he would share a smile and a hello. The Kainai/Blood Tribe community will remember Blake Standing Alone and the St. Mary’s Warriors basketball team of 1984-1987 as having gone down in Southern Alberta history as one of the best. As a key athlete of the Warriors, Blake led his teams to many victories on the basketball court, football field and track. On the field, he took the position of quarterback and his speed allowed him to decide when a 95-yard touchdown was doable. He made such a touchdown when he played with the St. Mary’s Eagles team. In 1985, the senior varsity Warriors, coached by Gerry Dawson, Doc Twigg and Don Behrens, took home the Southern Alberta 4A Zone banner; Blake was able to share this victory with his older brother Lyle. In 1986 after back and forth sharing of the league’s top spot, picking up numerous tournament wins, the Warriors came up short for a repeat championship; even still that Warriors team left a legacy. After high school, Blake was a member of Lethbridge Community College Kodiaks Basketball. Blake’s talent on the basketball court was complemented by his Warriors teammates; many talented Blood Tribe athletes, proud to wear the baby blue and gold, became Blake’s long-life friends, his brothers.

Blake had a knack for anything that had a motor in it. Pete had bought the boys dune-buggies, they drove them all over Old Agency and it wasn’t long before Blake started tinkering with all the parts. Very fitting, Blake made a career as a heavy-duty mechanic; he worked at Blood Tribe Public Works for a number of years. Blake always had awesome wheels and took great pride in customizing and caring for his rides. He enjoyed time spent with his brother-in-law Bill Shade in their shared love for cars. Being from a ranching family, he may have not have worn a black hat like so many in his family, but hand Blake a rope and his great hands knew how to use it well. Some of his family will remember his trick-roping ability, Jimmy Chief Calf, had shown him a few tricks with the rope. Blake was truly a jack-of-all trades and he loved a good time out on the golf course too. Loss of loved ones has its impact, the big heart Blake saw him step up after his sister Lori passed suddenly, taking on an extra father-figure role for his nephew Dean and niece Melissa, maintaining strength for his mother Hilda to be there for Lori’s family. He showed this same fortitude after the passing of his father Pete. Blake lovingly stood by and continued to help his brother Fagan at the Standing Alone Ranch. In 1997, he met the love of his life Wendy Rabbit and they spent 23 years together. He was an awesome family man and was beloved Grandfather to Drezus, Marcos, Avianna, Gabrielle (“My best friend in the whole wide world”), Romeo, Allia, and Baby Issiah Standing Alone – Black Horse.

Blake will be laid to rest in Old Agency Cemetery.