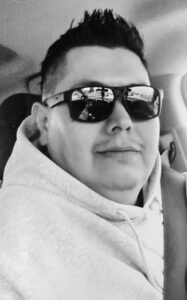 Blaine was a very soft-hearted man; people were drawn to him because he would give whatever he can to help someone out. He would give the shirt off his back to anyone in need. He easily made friends and impacted many lives by supporting and talking to them about his own life experiences. He took many youth under his wing to teach them about our culture and to drum and sing. He cherished his friendships and soon those friendships became his “brothers, sisters, aunties and uncles”.

Blaine received his education in Cardston, Alberta and graduated in 1998. He was a Champion Traditional Dancer at the early age of 7. His family began travelling from powwow to powwow throughout the year competing and more importantly making new friends. He had the honor of being the Head Teen Dancer for a powwow in Oklahoma and won many titles in Edmonton, Enoch, Hobbema, Eden Valley, Morley, Browning, Heart Butte, Piikani, Kainai, Siksika, Missoula, and Arlee. In addition, during this time, he played in the Cardston Minor Hockey League; however, powwow was much more interesting as he then began to drum and sing. Blaine and Billy began their powwow singing careers in 1991 with Painted Horse and travelled with them to many powwows. In 1998 Bullhorn came to life. The boys would practice in his parent’s basement with Bueford, Monte, James, Rueben, Sol, Kirby, Wiley and Andy. Blaine loved singing and travelling all over North America with his brothers. Blaine met many people and had so many friends on the powwow trail. Ceremony was a huge part of Blaine’s life; he began singing at Buster Yellow Kidney’s Sundance and continued drumming at many other ceremonies and Sundances until his passing. Every year Blaine looked forward to seeing his adopted family at Fort Belknap/Hays Sundance.

Blaine met the love of his life in 2005, but their relationship didn’t blossom until 2006. Blaine and Sandra have two beautiful children who were the joys of his life, Ry and Ny. They made their home in Lethbridge and at the time of his passing he was employed with the Kainaiwa Children’s Services Corporation. He loved bringing Rylan to his hockey games and practice and always encouraged him to try his best. Blaine always made sure his family was taken care of and that his baby girl Nyasia got what she wanted. They spent this last little while going for walks, spending a lot time outdoors, and just being together. Blaine loved his entire family very much and always greeted them with great big hugs and made sure to say “I love you” before parting or before he walked out the door.