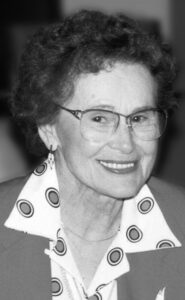 It is with grace and dignity that we announce the passing of MARY BOON of Lethbridge on Friday, July 17, 2020 at the age of 99 years, just five weeks short of being a centenarian.

She will be remembered by her son Glenn Allan (Patricia) and stepgrandson Todd Merrick, son Rupert Allan (Karen) and stepgrandchildren Candice Nagy and Mark Tanner as well as stepsons Alan Boon and Les Boon, stepdaughters Jeannie Walton and Julie Boon and their families.

Mary was predeceased by her parents, husbands Jim Allan and Phil Boon, and sister Lena Baker (Peter) of Edmonton, sister Elsie Milton (Albert) of Yellowknife and Edmonton, and brother Steve Snider of White Rock, BC.

Mary was born in Sheho, Saskatchewan on August 26, 1920 to Ukrainian immigrants John and Annie Snider. At an early age, Mary moved to Coleman, Alberta with her parents, sisters Lena and Elsie, and her brother Steve. Mary had many fond memories of growing up in “bushtown”. She studied nursing for three years at the Royal Alexander Hospital in Edmonton, becoming a Registered Nurse in 1943. Returning to Coleman, she worked for two years in a doctor’s office, helped out in the OR at the local miners’ hospital and assisted in delivering babies in the homes. In 1945, she married the first love of her life, Jim Allan. He was helping his father run a small Coleman grocery store. She gave up nursing to raise sons Rupert and Glenn.

The Allan family moved to Lethbridge in 1958. Jim was an accountant for Lethbridge Collieries, Horne & Pitfield Foods, and Commercial Printers & Office Outfitters, was a Purchasing Agent for Lethbridge Community College and then a long time Purchasing Agent for the University of Lethbridge. Family was most important to Mary. She became a stay at home full-time mother while her boys were young. Weekends were spent in many outdoor activities, such as camping, rock hunting, and exploring southern Alberta and BC. She was a strong believer in education and supported both her sons going to university. Later, Mary took up nursing again, firstly in private duty part time for eight years, and then full time in general duty for ten years in the Lethbridge Municipal Hospital ending in the ER and the new ICU, finally retiring in 1976.

Jim passed away in 1978 and Mary married the second love of her life, Philip Boon. Phil was the long term Manager of the University of Lethbridge Printing Department. Phil pursued woodworking and Mary sewing and gardening and being an excellent cook. Mary became an avid reader (especially of travel adventures). Together they volunteered with Meals on Wheels, camped, fished, and travelled, finally enjoying a round-the-world cruise.

In 2015, Phil and Mary sold their long term home in the 10A Ave South cul-de-sac, leaving many neighbour friends to take up residence at AgeCare Columbia Assisted Living. For several years, they were continually supported by Mary’s son Glenn (Patricia) and stepdaughters Jeannie Walton (Tom) and Julie Boon, all of Lethbridge. Phil passed away in 2017 and Mary continued residing at Columbia until her passing. She was supported by son Glenn and Patricia, and had great and continual communication and many visits from son Rupert of North Saanich, BC, stepsons Les Boon (Maureen) of Abbotsford, BC and Alan Boon (Joyce) of Courtney, BC, nephews Barry Milton (Robyn), and Campbell Milton (Shawna) both of Calgary and Peter Baker (Sue) and Danny Baker, both of Edmonton.

Due to current restrictions a funeral will not be held. She was cremated and will be laid to rest with her first husband Jim Allan in Coleman at a later date.

The family wishes to thank the staff of AgeCare Columbia for the excellent care and friendship that they have provided to Mary for the last five years and the support of Dr. Frick, Haig Clinic and the Home Care case workers of AHS for their professional support over the years.