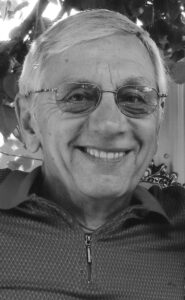 With a heavy heart we announce the passing of BEN REIMER, beloved husband to his bride of almost 50 years, Karen Reimer, at Chinook Regional Hospital on July 17, 2020 at the age of 77. Besides his loving wife, Ben is survived by his only son, Mason (Caroline) of Lethbridge and their two children, Abigail and Carson, who were his pride and joy.

He was predeceased by his parents, Henry & Susie (Riediger) Reimer, his grandmother, Katherine (Reimer) Klassen, and his brother-in-law, Bryan Bain.

Born in Vancouver BC on September 7, 1942, Ben’s life had very humble beginnings. One of five children of two immigrants from Russia, Ben was taught that a man’s word was his bond, to look a man in his eye when you shook his hand, and to appreciate the value of a dollar. His family moved to Vauxhall when he was three years old and settled in Coaldale when he was five. Ben enjoyed school as a child and got his first paper route when he was twelve. Ben worked after school as a pump jockey then quit high school to drive semi trucks for John Foder. When he was not working, Ben raced stock cars with SAAR (Southern Alberta Auto Racers). Ben was an active member of the Coaldale Kinsman for many years as well as McKillop United Church.

Ben’s life changed on August 11, 1962, when he had an accident and became a paraplegic. After spending the next nine months in hospital in Lethbridge and Edmonton, Ben drove home with his parents, using a crutch on the brake and gas. He decided to go to Lethbridge College and became an accountant since truck driving was no longer an option. He opened Ben’s Accounting in Coaldale shortly thereafter. Ben worked with Krahn Homes in the early 70s, then starting Astro Realty and in 1972 Ben sold his accounting business and started Astro Insurance Ltd. Ben successfully ran Astro for 27 years alongside his registry office and his property management company, Astro Property Management, which is still in business now.

On February 5, 1969, Karen walked into his accounting office and changed his life again. One year later, on the their first anniversary, Ben finally proposed and the two were married on September 5, 1970. Ben and Karen loved to travel and visited many of the US states, the Bahama’s, and Hawaii. Their favourite vacation destination being GreenValley, Arizona, where they wintered for many years. Ben loved entertaining his friends there and enjoyed having Mason and his family come and visit. Ben cherished his time with Karen and always was up for a game of cribbage or rummy. Their love grew stronger every day.

Ben and Karen adopted their son Mason in 1979. Ben loved being a father, showing Mason how to do all the boy things. Ben was involved with Mason as a scout leader, baseball coach, and pit crew/fellow kart racer with him. They loved to fish together at Duck Lake, tinker in the garage on karts, and share in each other’s company talking about everything.

Ben loved a good laugh and was so proud of all of his family. He was gentle, kind, and always ready to help. He arranged every party and family get together with precision and thoughtfulness. He will be deeply missed by many and loved by that many more.

A Celebration of Ben’s Life will be held at CORNERSTONE FUNERAL HOME, 2825 – 32 St. S, Lethbridge, AB on Wednesday, July 29, 2020 at 2:00 PM with Patrick Siedlecki officiating. Due to COVID-19 restrictions, the service will be invite-only; however, those who are unable to attend may watch a livestream via his obituary on Cornerstone’s website.

Ben will be laid peacefully to rest during a private ceremony in the Coaldale Mennonite Cemetery.

Flowers are gratefully welcomed as Ben loved them. If desired, donations can be made in his name to Spinal Cord Injury Alberta at www.sci-ab.ca/donate.