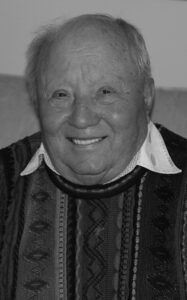 Stjefan (Steve) Kain husband of Nada Kain passed away peacefully on Friday, July 24th at Chinook Regional Hospital in Lethbridge, at the age of 86 years.

Steve grew up and worked on the family farm until he joined the army at the age of 19 where he became a border guard and served for two years. Steve wanted to find a better life and was determined to escape the communist country of Yugoslavia and eventually settle in Canada. He and a few friends sneaked across the border into Germany in the middle of the night when the German guards were doing their shift change. He spent a year in Germany working on a farm in hopes of getting to Canada, and with the help of a church was granted permission in 1958. He arrived in Regina, Saskatchewan where he began working in the construction trade and began his career of becoming a painter.

Steve worked hard and saved up his money in order to be able to bring his girlfriend Nada to Canada in 1963. They were married and lived in Moose Jaw, Saskatchewan until 1969 when they moved to Lethbridge, Alberta. He began the company of OK Painting and Decorating and later also secured his contractor’s license. After many successful years and long hours of hard work dad retired in 1988.

On many a day you could find dad walking around the neighborhood or at the local Tim Horton’s. He loved to walk, and he loved his coffee. Dad enjoyed watching his sports and most of all his time with family.

Dad was predeceased by his parents, brothers Joza and Iva and sister Katica. He is survived by his brothers Mirko (Kathy) Kain of Lethbridge, Mike (Seka) Kain in Ontario, Blaz (Danica) Kain in Sweden, sisters Ankitca of Croatia and Maritza of Australia.

We would like to thank the many nurses and Dr’s Thibodeau and Saleh for the care that they took in looking after dad during his stay. The extra measures they went to and always taking the time to keep us informed.

To honour Steve, we ask that instead of sending flowers please donate to the Diabetes Association, 8602 112 St NW, Edmonton, AB T6G 2E1.

One Condolence for “KAIN, Stjefan”