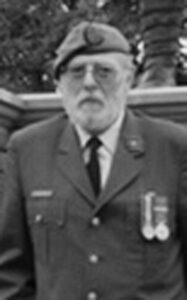 Mr. Colin Coutts of Lethbridge, beloved husband of the late Mrs. Mary O’Connor-Coutts, passed away on Thursday, July 23, 2020 at the age of 68 years.

Colin was born in Vancouver, B.C.on June 7, 1952. Because his father was in the military, he moved around as a child. He joined the Canadian Armed Forces after he was finished school, where he trained as a military medic. In the early ’70s he was released from the forces. He subsequently attended Devry Institute in Calgary and obtained a degree in computer sciences. Colin worked at St Mike’s hospital in Lethbridge as an orderly for a few years, where he met the love of his life, Mary O’Connor. He later rejoined the Canadian Armed Forces as an administration officer.

After retirement, Colin still worked within the reserves, and attended mess dinners and functions until the end. In retirement, he enjoyed golfing, traveling and entering his 2009 charger in various car shows. The vehicle had been air brushed with a very Canadian military theme. Colin was not afraid of anything. He was taking guitar and singing lessons. He would try anything new. He will be missed.

Besides his loving wife, Mary, Colin was predeceased by his parents, Kenneth and Dorothy Coutts and his sister, Nancy Boone.

Family and friends are invited to pay their respects between 6:00 pm, and 8:00 pm on Thursday, August 6, 2020 at MARTIN BROTHERS RIVERVIEW CHAPEL, 610 – 4 STREET SOUTH, Lethbridge, Alberta.