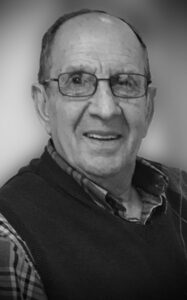 With heavy hearts, we announce the passing of our beloved husband and father, Joseph Mantello, on Tuesday, September 8, 2020. Joseph passed away peacefully after a courageous battle with cancer.

Joseph was born on October 9, 1935, in Grimaldi, Italy. At the age of 16, and with no other family members, he left his beloved country and came to Canada, arriving at Pier 21 in Halifax, Nova Scotia.

From there, his journey across Canada began eventually being reunited with his father in Michel /Natal, BC. He took on various jobs over the next few years that included working in forestry, mining, and the railway. It was not until he moved to the West Coast to study welding that he discovered his true passion and calling. With a newly acquired education and skill set, he moved to Lethbridge, Alberta, where his career began. Originally employed with Horton Steel in the 60’s, Dad’s knowledge and talent really shone during this period. A majority of the work was for the oil and gas refineries, where anything less than perfect was unacceptable. It was in 1972 when he started working with the City of Lethbridge and stayed there until his retirement. He was very meticulous and detail oriented in all faucets of his life. He took great pride in his work and that pride transferred in particular to his love of gardening.

On April 23, 1960, Dad married the love of his life Teresa Donato. Together they went on to raise four children.

Dad was very musically inclined; back in Italy he learned to play the French horn. He could be heard playing throughout the hills of his home town. His instrument of choice in Canada was the trumpet. He spent many years playing alongside his friends John Mazzuca, Armando Lavorato, and Aldo Vercillo, in a band they called The Southerners.

Joseph always planted a garden, and he was rewarded for his effort with an abundant harvest every fall. His retirement years also gave him the time to explore wine making, and he found great joy in reading. However, everything came to a standstill when either Inter Milan or the Italian National Soccer team was playing.

Joseph was a board member when the Italian Canadian Cultural Centre was constructed. He graciously gave of his time and labour during the construction of the building. He was honoured when the Centre recognized him as a lifetime member.

Joseph’s pride and joy were his grandchildren, whether it was time spent with them at his home enjoying an afternoon treat or cheering them on at the sports fields or dance recitals. He always had time for his grandkids. For those who had the pleasure of visiting Joseph at home, his greetings at the door were always welcoming and warm and he graciously offered his customary hospitality. He always had an infectious smile and loved sharing an afternoon espresso or cappuccino with anyone who stopped by for a visit.

A private Funeral Service will be held at 1:30 pm on Tuesday, September 15, at ST. BASIL’S CATHOLIC CHURCH with Father Kevin Tumback, officiating. Interment to follow in Mountain View Cemetery.

A mandatory face-covering and masking bylaw is now in effect in all public areas within the city of Lethbridge.

Martin Brothers Funeral Chapel ask that you please wear a mask at all indoor funerals.

In lieu of flowers, those who wish, may make a memorial donation to the Canadian Cancer Society https://www.cancer.ca/en/donate/?region=on&s_srx=cancer.ca-navbar-en

We would like to thank the team of Doctors at the Calgary Foothills hospital, Dr. Amatto and Ed at Norbridge Pharmacy and his staff, all of whom provided compassionate care.

Visit https://www.fhwebsites.org/ymb/obituary/Joseph-Mantello to watch the livestreamed service. Please note: the link to watch will appear between 1:00 pm and 1:15pm.