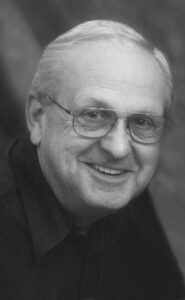 It is with overwhelming sadness we announce the passing of DAVID STILGOE of Lethbridge, beloved husband of Marie, on Sunday, August 30, 2020 at the age of 82 years.

David was born in South Devon, Fredericton, N.B. on March 6, 1938. He joined the Armed Forces in 1956 and this is where he met his loving and devoted wife, Marie. They married in 1958, settling in Lethbridge to begin their journey together. David worked on the family farm before joining the produce department at Safeway. Not long after, he followed his love for cars and launched his sales career selling cars starting at Beny’s car dealership and ending his sales career at College Ford in 2010 when he retired. David also had a passion for driving; whether it was as a tour bus driver or professional truck driver, he loved it all. He even raced stock cars with the SAAR (Southern Alberta Auto Racers) for a number of years. Many remember his red # 91; those were memorable times for the family. He was very proud to say that in all his years of driving, he held a perfect driving record. One of the most difficult times was when he had to give up his license due to Parkinson’s. He knew he was putting others at risk and would never forgive himself if he was to cause harm to anyone. That was the kind of man he was.

David was a kind and genuine man who made friends wherever he went. He loved having family and friends around, sharing stories and amazing food prepared by Marie. He had a love for country music and would spend hours listening to his favorite performers.

David will be sadly missed by his sister Nancy Squires (Bill) of N.B. and brothers-in-law Pat Bodnark (Margie) of B.C., and Mitch Bodnaruk (Diane) of Lethbridge, along with numerous nieces and nephews and friends. He was predeceased by his parents Grace and Wesley Stilgoe and father-in-law John Bodnaruk.

A Private Family Celebration of David’s Life will be held on Saturday, September 19, 2020.