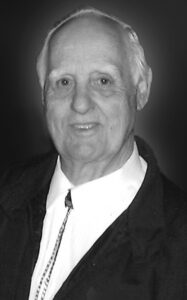 It is with deep sadness that we announce the passing of our father and grandfather GEORGE DEAN MUELLER, beloved husband of the late Doris Mueller and the late Selma Mueller. George passed away peacefully on September 10, 2020 at the age of 92 years.

George was born on October 30, 1927. He grew up on the family farm with his nine brothers and sisters. His first school years were spent at Kessler School then Wrentham. He married Doris Doren in 1953 and purchased the Conlon farm where they farmed and raised their three children. After Doris passed away in 1975, he married Selma Klaus in 1978. They retired to Lethbridge in 1986. George was a kind and generous man and a very active member of the community. He coached basketball and baseball and enjoyed curling for many years. He was inducted into the Alberta Sports Hall of Fame for coaching the Wrentham girls to a provincial basketball championship. He was a lifetime member of the Elks.

George loved his family and friends and enjoyed his retirement in Lethbridge, particularly a visit to the local casino.

George loved the farm life with his whole heart and passed that passion on to his son Carson and grandson Tim. He will be deeply missed.

A private graveside service was held in Warner.

Flowers are gratefully declined. For those who wish, memorial donations may be made to the Warner Volunteer Fire Department, Box 218, Warner, AB T0K 2L0.

One Condolence for “MUELLER, George”