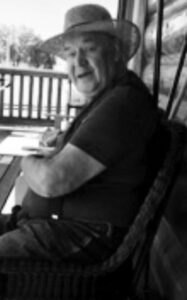 LESTER HARVEY TAILFEATHERS (Otahkoitaa) passed away peacefully surrounded by his children and loving wife, Virginia, on September 13, 2020. He was a strong and willful man, battling cancer for almost two decades had taken its toll on him. He is survived by his loving wife of 61 years, Virginia. His children Esther (Bjarne), Bill (Laurie), Kelsey, Ann (Jake), and Jim (Brynne), 15 grandchildren, and 5 great-grandchildren, his siblings Georgette Fox, Margaret Fox, and Rick (Sharon) Tailfeathers, and many nieces and nephews. He is predeceased by Nellie and Harvey Tailfeathers, his siblings Phillip, Gilbert, Lillian, Christine, his eldest son Darcy, and his eldest granddaughter Tara. Lester was born September 23, 1939 on the Blood Indian Reserve at the Indian Hospital to Nellie (nee Many Fingers/Yellow Creek) and Harvey Tailfeathers. He was also raised by his grandfather Tsakoyina (Fred) Tailfeathers and Suzette Eagle Ribs and his step-grandfather Tsiiyaa (Howard Hindman). He attended St. Paul’s Residential School and Jasper Place High School in Edmonton – where he was also a cadet. He was a gifted athlete and later he passed much of this onto many generations on the Blood Reserve. He was an avid learner throughout his life, he studied meteorology in Ottawa and took courses in business and management at Lethbridge Community College, but the learning never stopped.

Always a hard worker, he had many occupations over the years. He was a police officer on the Blood Reserve, a fruit picker in Washington, a supervisor at St. Paul’s Residential School, a Cardston School Board Trustee, Blood Tribe Recreation Director, a Blood Tribe Band Councillor, a housing contractor, and the operator of a gas station. Lester was a rancher for more than 60 years, managed the Blood Tribe Bus Co-op for 35 years, and he was passionately involved in the horse racing business for almost 20 years.

He volunteered his time coaching hockey, basketball, baseball, softball, and even gymnastics for over 40 years. An avid carpenter, he helped to build and renovate numerous homes over the years. He spent years of countless days working around the house and yard and could often be found on his riding lawn mower in his later years. He made an active effort to teach many young people these skills over the years. His most recent apprentice was his adopted grandson, Ace Black Plume.

Lester was a member of the Iitskinaiks (Horns Society) who respected and revered our traditional ways. He was a natural leader who was both generous and compassionate, forever a storyteller and a joker. He devoured books and was a fervent historian, always ready to share his knowledge with all. The family would like to thank the many physicians and health care practitioners who helped him over the years. In lieu of flowers, please make a donation to the Canadian Cancer Society, the Kidney Foundation of Canada, and the Heart & Stroke Foundation. The Funeral Service will be held at Legacy Funeral Home, Cardston on Saturday, September 19th at 11:00 a.m. Interment in the St. Paul’s Cemetery, Blood Reserve.

To WATCH the Service or send condolences please visit: