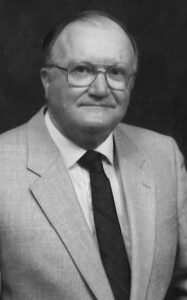 It is with sadness that the family of George Piper announce his passing on September 15, 2020 at the age of 89 years, at the Medicine Hat Hospital.

George was born on March 18, 1931 at the Galt Hospital in Lethbridge. He grew up on the family farm with his brother and sister, was home schooled one year, then attended Coulee Bank and Sunalta schools until the school districts were consolidated and then spent the rest of his schooling, where he excelled in mathematics and the sciences at Foremost School and graduated in 1951 with a High School Diploma.

He learned to play the violin with George Muza and also the accordion. He started farming in 1950 and retired in 1995. A special friendship developed with Doug Mueller and the Mueller family when together they purchased the Dr. Brit Hunt land and farmed together for many years.

He helped build many homes in Foremost (many with Ray Geldriech) and finally his own. A community minded man, he served on Village Council for 39 years, 15 years as Mayor and 12 years as Deputy Mayor. With his aptitude for mathematics the organizations became like a hobby for him and he faithfully and honestly kept financial records for many organizations for many years.

He was a faithful member of the Elks Lodge and served as secretary for five years and treasurer from 1970 to 1994 and served one term as District Deputy. When the Foremost Elks discontinued operation, he maintained his membership with the Bow Island Elks Lodge and continued as secretary-treasurer of the Sage Club from 1994 – 2018. He was treasurer of the Foremost Seed Cleaning Plant through its construction and from 1971 -1996. He served as treasurer for the Foremost Ag Society since 1988, the Foremost Civic Center Arena Committee since 1979 and the Cypress Hills P.C Association until recently. George loved his family and friends and enjoyed all the Piper family dinners, reunions and weddings. Many happy times were spent with Tony Kanig, Jim Hearn, Tony Voeller, John Wutzke, Frank Heck and Mel Boschee sometimes playing bridge and sometimes enjoying 83, just laughing and having a good time.

George loved his community and supported all the organizations that made Foremost such a special and unique community In lieu of flowers those who wish may make a donation to the Foremost Community Hall one of George’s favourite projects, or a charity of your choice.