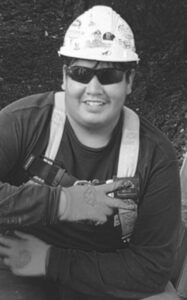 Dustin (Aapsstawata-Scraping White) was born on September 4, 1993 and passed away on September 23, 2020 in Lethbridge, AB at the age of 27. He is survived by parents Shawn and Karen Shade, siblings Sage (Keana), Montana (Jace), Colton (Jaylynn), Kesse, and Mataya Shade.

At a very young age Dustin was a cool kid with style. He was a polite and respectful person. As a kid he played minor hockey up to midgets, attended provincial and Treaty 7 games. He was also scouted to play with Sunchild at Native Provincials in Edmonton. When he moved to Lethbridge, Calgary, and Edmonton, he would pack his stick and skates and try to skate anytime he could. He formed a bond with his Blackfoot Emersion teacher Mrs. Agnes First Charger. He would often come home with new words his mom and dad didn’t even know; she taught him the Blackfoot prayer and was called upon to pray during special family dinners. He always had space in his big heart for all elders. At family gatherings, he would often sit and visit with his great aunties and uncles, many times he would sit in his favourite position, on the ground with his legs crossed, ready to listen, or telling funny stories that usually started with his distinct chuckle. Dustin had a genuine interest in our Blackfoot culture, often attending sweats and ceremonies. In 2005, he was given his Indian name. Grandpa Ervin named him “Aapsstawata” (Scraping White). He had much pride in his name and carried it well. Because of the path he followed and his outgoing attitude, he was able to make friends easy and form lifelong friendships. Dustin loved his siblings and he would tell them stories about his adventures and about the people he met along the way; including the time he went to Vegas with the Many Fingers and got a pedicure with Verna. The manner in which he told stories about being a pipeliner, you could tell he was proud and loved what he did; he grew fond of the welders and was seriously thinking about pursuing a career in welding. After finding out he was ill, he wanted to go back to school at the U of L and go into the social work field. He loved people and helping people, that was his true calling.

One of his dreams was to attend an electric music festival in Las Vegas called EDC. This got him interested in DJing. He was hired to DJ at a few night clubs in Lethbridge and to do personal events in Siksika and for weddings. He wanted to pursue DJing professionally but was called to work from the oil and gas industry. Other interests include boating with his late grandpa Martin, camping and fishing with friends and family in the mountains, and family gatherings. He travelled to powwows with his grandma Alma and great auntie Gertrude. Dustin had a very special relationship with his grandma Alma; she helped raise him and was always there for him. He also travelled with his grandparents Alma and Martin to Albuquerque, Las Vegas, and the Grand Canyon. Out on the Shade Rodeo Ranch, Dustin learned how to work hard and handle bucking horses; he did all ranch chores with his dad, brother and uncles, Todd, JJ, Willie, Kevin, and the late Tyson. At a young age he started his apprenticeship of head man with his cousin Austin, under the guidance of their uncles. Doing colts in the fall, they would dare each other until someone would finally jump on the head, and after that they would find their grove. Dustin grew fast and into a big man. From colts he graduated to being head man with Tyson at Springtime during the cutting of the studs. He would often tell friends and family about his head holding technique of twisting the neck and looking ’em in the eye. He was proud of being a member of Shade and Sons Rodeo and begun raising his own bucking horses he got from his dad and uncle Willie. Dustin and Colton helped their uncles Willie and Todd get in the last bunch of horses for the spring roundup. With his hard work ethic, skills, and PhD (Post Hole Digging) in hand, he found work in the oil and gas industry with Dunwald & Fleming Pipeline. Dustin and Colton were certified coaters for the company and were being trained to operate machinery. It took Dustin very little time to work his way up to lead hand. Most times being the guy leaning on the shovel bossing people around. There were times he would butt heads with his boss, and it was his true nature that kept him from getting canned. Dustin looked forward to being a father, but after losing his daughter Addison, he focused on being an uncle and devoted his love and attention to nephew Zuhkai. Dustin was consistent, friendly, truthful, and respectful to all. Dustin would like to thank the healthcare staff, the ICU team, specialists, nurses, and the doctors that made him comfortable and treated him with dignity at the Lethbridge Chinook Regional Hospital.

A Family Service will be held at the Tanner Senior’s Center (260 1 St W, Cardston) on Thursday, October 1st from 4:00 – 5:30 pm. The Wake Service will then be held at Christine Shade’s residence, Blood Reserve from 6:00 pm – continuing all night. A viewing will be held at Legacy Funeral Home, Cardston on Friday, October 2nd from 9:00 – 11:00 am with the Funeral Service to follow at 11:00 am. Interment in the Shade Family Cemetery.