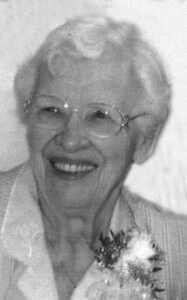 Mrs. Lillian Leith of Lethbridge, beloved wife of the late Mr. Allan Leith, passed away peacefully on Tuesday, September 29, 2020 at the age of 97 years.

Lillian was born near Didsbury, Alberta to Garnet and Ethel Tighe. She was raised on the family farm east of Didsbury. She attended a country school and also attended school in Carbon, Alberta. She then went to work in a store for a period of time.

She met Allan, who was working on a threshing crew at her father’s farm. They married, moved to Iverness Que. to farm where Elaine was born. Several years later they moved back to Alberta to Arrowwood to work for Canada Land. They transitioned to Vauxhall to work for the P.F.R.A. in 1951 where Barry was born.

Lillian was a home-maker and mother first. She loved her garden and was an active in the Parkview United Church as a UCW volunteer and C.G.I.T leader. She took part in a number of community events. They moved to Travers with the Alberta Provincial Government until retirement, returning to Vauxhall.

They took several trips which included a trip to Australia and two across Canada. There were also lots of family camping trips. They eventually moved to Lethbridge in their reclining years.

Due to recent restrictions surrounding COVID-19, a public celebration of Lillian’s life will be held at a later date.

A private family graveside service will take place in the Archmount Cemetery.