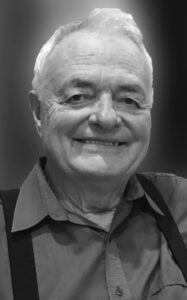 Albert (Al) Daniel Laplante of Lethbridge, Alberta died on Saturday, October 3, 2020 at the age of 82. Al passed away peacefully with his sons and daughter by his side after one week in hospital following a severe stroke.

One of eight children, Al was born in Vimy, Alberta on October 1, 1938 to parents Emile and Therese Laplante.

Al is survived by his four children Dan (Karen), Carmen, Dave (Dusty) and Al Laplante; grandchildren Cadence, Claire and Sam, Brett, Luc, Jamin, Jesse and Rylan Laplante; sisters Alice Ranks and Rita Frost and brother Joseph Laplante. All held him in the highest regard and loved him dearly.

A skilled and passionate hockey player, Al had an illustrious career on the ice as well. He was a top scoring player for the U of A Golden Bears, the Edmonton Oil Kings, and the Lacombe Rockets. He played against the Russians in a European tour with the Rockets and turned down an offer to join to the Detroit Red Wings organization in favour of returning to university to complete his Master’s degree.

If asked, Al would say his greatest accomplishments were not his engineering career or his hockey legacy but being a father and grandfather. He always showed keen interest and pride in all his children and grandchildren’s accomplishments and never tired of bragging about them.

In retirement Al was an active and proud member of the Knights of Columbus Council #5726 and he enjoyed golf, playing competitive bridge, and travelling to warmer climes to get out of Canadian winters.

The world has lost an ever optimistic, cheerful, generous spirit.

Due to Covid restrictions, a private family funeral service will be held for Al at 1:30 pm on Tuesday, October 20, 2020, with Father Kevin Tumback, officiating. Al’s family invite you to please watch the service via livestream at the Martin Brothers website under Al’s obituary. Inurnment will take place in the Mountain View Cemetery.

The family would like to suggest that anyone wishing to honor our Father’s lifelong commitment to family and community consider donating to the Al Laplante Scholarship for Civil Engineering at Lethbridge College. Please send donations to the Development Office, Lethbridge College, 3000 College Drive S, Lethbridge, Alberta, T1K 1L6 or on-line at www.lethbridgecollege.ca/give

One Condolence for “LAPLANTE, Albert”