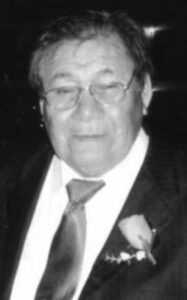 I have fought a good fight, I have finished my course, I have kept the faith.

At the time of his passing, Martin Sr. ministered the Word of God among the First Nation people in Canada and United States and fulfilling the role of a Spiritual father to many.

Dad also owned a Gospel Tent where he brought his tent with his family to Crow Agency, Lapwai Idaho, Carrier (Tachet) First Nation in BC and surrounding area.

One of his ministries as he went out to the gospel, he brought his young son to sing and preach Josh in the gospel field also earlier life dad attended St Mary’s Residential School and survived the atrocities that our people experienced as survivor. He went home from school and never returned back as his Father Jack Sr. kept him home. In his younger day’s dad was a hockey player and his position was a center and forward. He played with the Big Corners and also played in the B Side All Native Tournament and his son Martin Jr had a privileged to play also on Ice with the team the Lavern Red Wings in 1993-1996.

Dad was very supportive and proud of all his children and grandchildren in sports such as Hockey, Fastball, Basketball but the greatest was seeing them serving our Lord and Savior Jesus Christ as he raised them in the Christian Value and instilling them and rooting them in the Gospel.

Dad was also a Farmer in his younger days he loved seeding and cropping with his brothers and uncles and in the Gospel, he was also a sower preaching the Salvation of Jesus Christ.

Dad also worked for local farmers such as Wallace Archibald, Henninger, Forest Bevans where he also had the privilege to work with his Son-In-Law Casey in the Field.

He was employed with the Blood Tribe Public Works for many years and we as the family would like to thank you for your support. Dad was also a carpenter and he worked for housing contract and with his skills he helped in the Navajo Nation build two churches on his gospel trip one in Sweetwater Arizona and Alamo New Mexico. Dad was a jack of all trades one of his hobbies he enjoyed doing leather work and he enjoyed reading his favourite was his Bible that gave dad comfort and brought him through his journey of his trials.

Dad enjoyed family gathering and events, he supported his nieces and nephews in every way he could help out. Dad loved his siblings and he tried to be with them also.

This world has lost a great man, but heaven is rejoicing with dad as he dances on the streets of glory with the lover of his soul Jesus Christ.

Dad loved all his children and grandchildren he spoiled them and always made sure they had everything that they needed. Dad was very heart broken when he lost his baby girl Joanne Curly Rider in 2016 and his great grandson DeRozen in 2018.

Dad we love you and we thank you for planting the seed of the Gospel as you trained us and also instilling us to work hard and to go for our education but to always put God first and pray and have faith.

The family apologies if we have missed anybody as Martin Sr, had a lot of Family and Friends.

A Wake Service will be held at New Life Fellowship Church in Little Chicago, Blood Reserve, AB on Friday, October 16th, from 6:00 pm. continuing all night.

The Funeral Service will be held at New Life Fellowship Church in Little Chicago, Blood Reserve, AB on Saturday, October 17th, 2020 at 11:00 am. Interment in the Pioneer Cemetery.