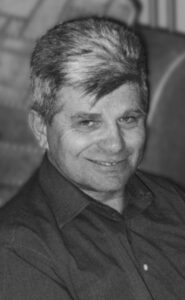 With great regret, we announce the passing of SYLWESTER TUTAK, the beloved husband of Maria Tutak, of Lethbridge, peacefully at home on Thursday, October 15th, 2020, at the age of 75 years.

Sylwester was a loving father to Wieslaw (Darlene) Tutak of Victoria, Wioletta (Cameron) Nagata of Lethbridge, Terry (Crystal) Tutak of Lethbridge and grandpa to Joshua, Nathan, Zachery, Sydney, Madison, Myah, Ethen, Jaxon and Connor. He was predeceased by his parents Wojciech and Maria Tutak, his brothers Ed and Stan Tutak. He is survived by his sister Stanislawa Tutak and younger brother Joseph (Teresa) Tutak.

Sylwester was born January 5, 1945 in Glinik Dolny, Poland. He was the third child of five. Sylwester met Maria, the love of his life in 1967. They married in 1969 and started their life in Poland having two children, working as a heavy-duty mechanic and running a family farm. In 1980, Sylwester and Maria emigrated to Canada, settling in Taber, Alberta. To their delight and surprise, they expanded their family with the birth of their third child. Sylwester spent the next twenty years working for CPR without missing a single day. He attempted retirement in 2000 but soon decided to rejoin the workforce as a school bus driver. He continued to drive school bus after moving to Lethbridge in 2006, when a courageous battle with cancer forced him back into retirement.

Sylwester was an avid gardener and a jack of all trades. He was a devout Catholic and continued attending church even through his health struggles. His incredible work ethic and stubborn personality allowed him to persevere despite a long struggle with neurosurgery complications. Sylwester loved to dance and was a thoughtful man who loved his family.

A Funeral Mass will be held at OUR LADY OF ASSUMPTION CATHOLIC CHURCH, 2405 – 12 Avenue South, Lethbridge, on Wednesday, October 21st at 11:30 A.M., with Father Kevin Tumback as Celebrant. Interment will follow in Mountain View Cemetery.

Due to COVID-19 restrictions, kindly RSVP your attendance to Cornerstone at 403-381-7777 or care@cornerstonefh.ca. Seating will be limited to 90 guests. Facemasks are mandatory and will be available upon entry.

In lieu of flowers, donations can be made in Sylwester’s name to the Canadian Cancer Society (www.cancer.ca)

One Condolence for “TUTAK, Sylwester”