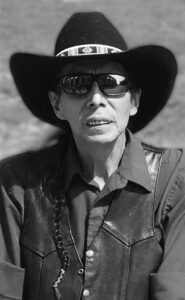 KEITH “KEON” FRANKLIN GODFREY WEASEL HEAD, beloved husband of Linda Weasel Head, was born at the Blood Indian Hospital on January 8, 1960 and the Creator sent his father, Miiksskim, to bring his spirit home in the early morning hours of Friday, October 16, 2020 at the age of 60 years.

We will miss the laughter, crazy jokes, knowledge, songs and his love for us. He lives in our hearts now. We have already seen him flying with the eagles, no longer suffering with pain.

Keon loved the adventures of life, the challenges of mathematics, and his Blackfoot language and culture, and teaching grade two & three at Aahsaophi Elementary School. He was a member of the Crazy Dogs from the Blackfeet reservation in Montana. He was a part of numerous drum groups throughout his life. He spent a lot of his early years at the Sundance and attended various ceremonies on the Blood reserve. He made many friends on the handgame trail in Canada and the USA. Many considered him a formidable opponent. He and Linda were fortunate to have traveled to Hawaii, Australia, and New Zealand where he made many friends with the grassroots Indigenous peoples. The Australians wanted him to come teach and learn with them. The Maori of New Zealand exchanged languages, phrases, and gifts, even inviting him to their traditional lands and giving him free taxi rides while we were at the WIPCE conference.

He was never one to forget his own people and was especially kind-hearted and generous to those less fortunate as he knew through experience how hard life can be at times. He made many donations to the shelter in Moses Lake. His niece stated “On a tight budget, Keon and Linda would go all out to give the kids a better than ever Christmas never leaving out their nieces and nephews.” He loved to do last minute shopping.

He was encouraged to pursue a degree in education, when people saw that he was a natural teacher. These skills were recognized by Kainai Board of Education and he was named teacher of the year in 2007, just two years after he received his BEd from the University of Lethbridge in 2005. Keon was also a forest fire fighter and was part of an elite crew out of Missoula, Montana.

He was most proud of his children, grandchildren and great grandchildren, always encouraging them to do their best, to finish school, and pursue their talents. He wanted his children and grandchildren to know their roots. When his granddaughter asked for information on her ancestors he wrote, “On my mother’s side, you are from the Short People’s Clan and from my Father’s side Mikskiman (Iron) Clan. On my grandfather’s side there are two clans: Owns Many Different Colored Horses and Akaksiman/Old Agency.”

Keon loved the land. During the spring season he would take time to pick sage, in summer season he would spend countless hours picking Saskatoon and Bull Berries, becoming famous for his “berry surprise”. He loved fishing in the streams of Montana for rainbow trout, where we would often go camping taking a whole carload of kids with us. He loved to fish for Pike, and then cook it up with his secret recipe. All these foods would be shared with others throughout the fall and winter. In turn he would ask for berry soup and fry bread.

Keon took pride in his collection of Matchbox cars. He displayed his favourites and kept a box of cars to give to the little ones, who looked forward to this gift from Papa or “Ampa. He also loved to make model cars, which he painted with just the right colors. He loved challenging puzzle books, gadgets, drones, and to his delight, discovered online shopping.

He always made sure to include his grandchildren in our family events on both sides of the border. His grandchildren include: Kathy, Robert (Suset), Matt-Matt, Jeremiah, Kailene and LiliAnna Howard who all reside in Montana. Cassondra, Samantha (Trevor), Cynthia (Buddy), Jessica (Horace), Desiree (Harvey), Brittany, and Kobe (Joley) Big Swallow; Sekoya, Kimowan, and Kihiw Weasel Head – Kehewin; Ethan, Draven, and Athena Weasel Head; Kenden White Quills and Derek Scout. A special place was always in his heart for his great-grandchildren who called him Papa or ‘Ampa: Robert Jr., Denzel, Liam, Clara-Jane, Arrianna, and Emberly Howard; Doyle, Devin, and Little Man Shouting; Jalisa Healy; Valen, and Hartley Sweet Grass.

The huge family of handgame brothers and sisters and his adopted moms who always doted on him: the late Veronica Scott, Louise English, and Hilda Standing Alone. From the north, he was a brother to the Cardinal families.

Our families are huge and he had many, many friends, we apologize if we have overlooked anyone. When the Covid-19 has settled, we will have a memorial feast/handgame tournament.

A Funeral Service will be held at CORNERSTONE FUNERAL HOME on Saturday, October 24, 2020 at 11:00 A.M. with Father Pawel Andrasz O.M.I. celebrating. Burial to follow.

Due to COVID-19 restrictions, kindly RSVP your attendance to Cornerstone at 403-381-7777 or care@cornerstonefh.ca. Seating will be limited to 90 guests. Facemasks are mandatory and will be available upon entry.

One Condolence for “WEASEL HEAD, Keon”