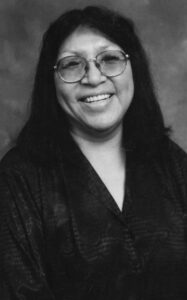 It is with heavy hearts that we the family of DOLORES STANDING ALONE -“Pah-tsii-kamosaakii” announce the passing of our beloved mother at the Lethbridge Regional Hospital on October 14th, 2020 at the age of 67 yrs. Dolores was born September 14th, 1953 at the old Indian Hospital on the Blood Reserve, to the late Gilbert Standing Alone Sr and Mary Ruby Standing Alone. Dolores is survived by her children Rochelle (Raymond) Standing Alone, Patti (Lee) Standing Alone, Ryan Standing Alone; Step Daughters Joyce (Donald) Rabbit, Edna Bird, Monica Black Water, 25 grandchildren, 19 greatgrandchildren. She also raised her first 2 grandchildren, whom she held close to her heart-Leland Trey (Tristan) Standing Alone and Shae (Mariah) Standing Alone and Lily Standing Alone (Fred and Dolores’s special baby) She is also survived by her sisters Theresa Standing Alone, Angela (Lawernce) B-S-H, Lorna (Merlin) Eagle Plume, Doris (Les) Standing Alone, brothers; Gilbert Standing Alone jr, Ronald (Rochelle) Cutter. Her adopted mothers Pauline White Grass, Diane Plume, also known as the “Golden Girls”, her godmother Elizabeth Red Crow. Several nieces and nephews. Dolores had numerous adopted children, too many to name, the ones she raised were Shane (Chayla) B-S-H, Daisy Rose Plume, John (Andrea) Big Throat, Tami Whiskey Jack. She was “mom” to everyone. Dolores had a lage extended family including the Standing Alones, Eagle Speakers, Hind Bulls, White Man Lefts, Shoutings, Prairie Chickens, Weasel Fats, First Riders, Across The Mountains, Medicine Cranes, Knives, Chief Calfs and many more extended families. Also numerous friends, too many to name. Dolores was true to her beliefs, both Catholic and Traditional and remained a very humble person til the end. She taught her children to be strong and believe in the power of prayer, that forgiveness always followed. Her love for everyone is what kept her going. Dolores started her education at the St.Paul’s Residential school, then went on to Cardston, Magrath and on to Drumheller AB. She was a homemaker until her children got older and then decided to further her education by doing upgrading at Red Crow Community College and getting her life skills certificate. She then went on to get her early childhood education and received her certificate. During those years, Dolores worked with her mother for a few years, taking care of seniors and the disabled. They also did custodian work in the community buildings. Dolores always opened her heart to many other children too numerous to mention, who called her mother and know in their hearts who they are. Her selfless, kind, and nurturing nature shone through when helping others. Dolores continued her traditional ways with the Blackfoot Sundance Horn Society on the Blood Reserve in 1988-1992 where she and her husband Fred Weasel Head were truly honored to be a part of the Sundance. She then took up a job in Calgary, AB where she participated in the Calgary Stampede and got the name “The Bannock Queen”. Dolores also held numerous jobs in the Day Care facilities from Calgary, AB to Standoff AB, to Cardston, AB. This position was her passion, taking care of children. She was known as “Grandma” to all the children she cared for. Because of her love for children she then became a foster parent and safe home for those who were in need of a home and pure love. Her pasttime hobbies included going to the casino, playing bingo, THAT, she enjoyed. She had numerous friends and families and a special group we called the (GOLDEN GIRLS) Theresa, Anita, Pauline White Grass, Diana Plume, and her special little sidekick that helped her carry her bingo bag in (Brekken). Dolores was such an amazing, loving person. She just knew how to ask for someone to drive her all over if need be, and never was alone, either driving with her sister Theresa, Gilbert or one of her many children. She always made her way around. Dolores (mom) was truly a pure and humble loving soul that will truly be missed. We know that GOD truly only takes the best.