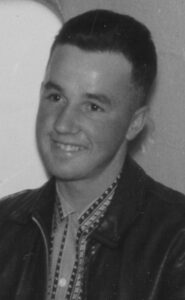 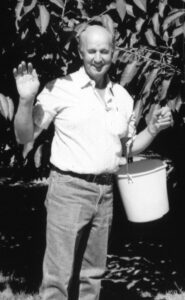 John was born on April 25, 1935 in Coaldale, AB to David and Louise (née Loewen) Friesen. Times were difficult; they had five children already, but had lost five others before John was three years old. John himself nearly died from croup in 1937, but he survived to become—in his sister’s eyes—“a very kind, clever, and sincere boy driven by hard work and determination.”

He went to Coaldale Grade School and later to Mennonite High School, and graduated with good marks. John played the violin and organ, and was again described by his sister as “a very conscientious student and perfectionist. Good at almost everything he tried.”

At the age of 20, his father having already died, his mother passed and John took over the family farm, essentially, with no cash on hand but with the help of his sisters early on. Gradually, with patience and hard work, he became a prosperous farmer.

He loved natural beauty and made his farm beautiful. As a man, he took care of what God had given him, rarely asking for help from others. He was very mindful of his sisters in helping in whatever was needed; fixing their cars, doing repairs to their houses and taking them to church on Sundays. He leaves behind no children as he never married. He was a farmer who simply wanted his life to glorify God.

He loved to study the Bible appreciating God’s grace and mercy towards him in sending His son, Jesus, to love him to the point of death on a cross so that he too might one day join in eternal life. John enjoyed sharing his faith with whoever would listen. Being a farmer at heart, he understood that unless a seed falls to the ground and dies, it cannot bear fruit. In life, he bore fruits of kindness, gentleness and self-control.

In his last days, John simply sought rest from his labours, grateful for all God had done for him and through him, and it was his desire that the material fruits of his labour go toward building God’s kingdom. It is for this reason that a celebration of life will be held in his honour at a later date once his final Will is disbursed.

Yes John, you were loved as you now know fully.

For now [in this time of imperfection] we see in a mirror dimly [a blurred reflection, a riddle, an enigma], but then [when the time of perfection comes we will see reality] face-to-face. Now, I know in part [just in fragments], but then I will know fully, just as I have been fully known [by God].

And now there remain: faith [abiding trust in God and His promises], hope [confident expectation of eternal salvation], love [unselfish love for others growing out of God’s love for me], these three [the choicest graces]; but the greatest of these is love.

Thank you to the St. Michael’s Health Centre Palliative Care team as well as the staff of the Crowsnest Health Centre and Chinook Regional Hospital, who cared for John as he navigated his last days when his body began to fail him.