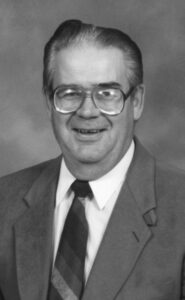 Mr. HANS DIETRICH “DICK” KERBER, beloved husband of Mrs. Yvonne Kerber of Claresholm, formerly of Lethbridge, passed away due to heart failure at the Fort Macleod Health Centre on Thursday, October 29, 2020 at the age of 84 years. Despite this failure, his beautiful, big heart loved so well and so many for many, many years.

In addition to his loving wife Yvonne, he is survived by his children: Carol and Ken VanRootselaar, Pat and Laura Budd, Brenda Kerber and Keith Rowe, and grandchildren: Nicole, Keith, and Anita VanRootselaar and Alex, Taylor and Lana Budd. He is also survived by his sisters, Frieda Regher of Innisfail and Linda Peterson of Surrey, B.C. as well as five nieces and nephews.

He is predeceased by his parents, Hugo and Hildegaard Kerber and nephew, Dirk Regher.

Dick was born April 29, 1936 in West Prussia, Germany. He spent his early childhood on the family farm in Vistula valley. The family was displaced to Northwest Germany in 1945 as a result of World War II. They emigrated to Canada in 1951 and settled on a small vegetable farm near Park Lake, Alberta.

Dick completed his high school education at Coalhurst school and enrolled in the Lethbridge Junior College in its first year of operation in 1957. Ten years later, he completed his Bachelor of Education degree from the University of Alberta. Dick was an elementary school teacher at County of Lethbridge schools for 32 years, most of them as Principal. He identified strongly with the parents of the students at these rural schools and appreciated their involvement in the schools, which often were the community centers. His leadership skills, sense of humor and love for his students were much appreciated by fellow staff and families.

In retirement, he continued to be active, enjoying gardening, handiwork, traveling on many cruises with Yvonne, and spending time with his grandchildren. Dick kept his hand in farming, initially at the family farms at Park Lake and Kipp and later at Claresholm and Kelliher, SK. Dick was actively involved in Christ Trinity Lutheran Church and the Lions Club. His favorite projects were: raising money for the Dog Guide program, sorting eyeglasses for the eyeglass campaign, driving the VIP blind bowlers to their regular outings, and transporting donated eyes to Calgary for transplant recipients.

Family was the most important thing for Dick. He loved and encouraged his three daughters and showed this by phoning, writing notes, writing checks, and driving to visit as often as he could. He loved and cherished each of his grandchildren and never missed an opportunity to attend their events from sports to a heavy metal music concert to a Masters dissertation. The family will cherish memories of his famous BBQ’s served with love and no shortage of food.

Due to Covid-19 restrictions, a Small Family Service will be held on Friday, November 6, 2020 at 11:00 A.M. For those unable to attend, the service will be live streamed and may be accessed via Dick’s obituary on the Cornerstone Website. A Celebration of Dick’s Life will follow in the future.