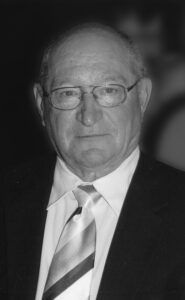 GARRY ALAN GILBORN, beloved husband of the late Diane Gilborn, of Lethbridge, passed away peacefully at the Chinook Regional Hospital with family at his side on Sunday, November 8, 2020 at the age of 81 years.

He was predeceased by his wife Diane in 2004, his brother Stewart in 2019, parents Dan and Eva.

Garry was born November 8, 1939 in Shelby, Montana and lived in Coutts with one older sister Beryl, and three younger brothers Stewart, Brian and Richard. Garry attended school in Coutts where he was a star athlete, particularly in basketball and a natural student. Before retiring, Garry worked on farms, as a customs broker, at CP rail and as a truck driver.

There were four main elements to Garry’s life: family, friends, travel and sports – all tied together with a bow of passion.

Garry had many friends because he was very outgoing and was quick to share a story with anyone. He made lifelong friends from Coutts, Milk River and Warner through school, sports and work. He also made an amazing group of friends later in life including a loyal and special friend Geraldine. They have a regular coffee group and got together for birthday dinners and travel. A special thank-you goes out to his friend Quince who picked him up daily to go for coffee.

He truly found his passion for traveling after retirement. He enjoyed many cruises with friends and family and his ever loyal travel companion Gerri. Some highlights were, The Holy Land, Alaska, the Panama Canal, Baltic cruise, New York, Paris, Newfoundland, Mexico and the Dominican Republic.

Garry volunteered his time to causes that were important to him and was a longtime member of the Knights of Columbus. He would drop anything to help family or friends in need – no questions asked. His outspoken, honest, fiery and story-telling personality will be missed by all.

Cremation has been entrusted to Cornerstone Funeral Home.

The Celebration of Garry’s Life will be held on Tuesday, November 17, 2020 at 1:00 P.M. with Francis and Cybele Noronha officiating. The service will be live streamed and may be accessed via Garry’s obituary on the Cornerstone website. Following the Celebration of Life, and after a short break, the live stream will continue with the Graveside Service.

Due to the increasing number of Coronavirus (COVID-19) cases and taking into consideration the health and safety of others, Garry’s family respectfully requests that other friends and family take part by way of the internet live-stream service.

In lieu of flowers, donations can be made to the Canadian Cancer Society (cancer.ca/donate), Make a Wish Foundation (makeawish.ca/waystogive) or to the charity of choice.