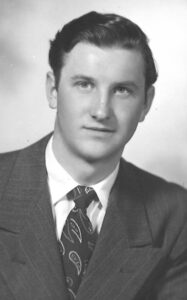 Steve Kovacs passed away peacefully on Wednesday, November 18, 2020 surrounded by his family, at 90.5 years of age (he was a stickler for details).

He is survived by his loving wife, Mary, who was with him always “in good times and in bad, for better, for worse, for richer, for poorer, in sickness and in health”. He was a loving dad to Jerry of Ottawa; Diane (Darren) Malchow, of Lethbridge, and their children, Lindsey (Ryan), Vance, and Brenna. He was incredibly proud of being a new great-grandpa to Macen, whose chubby cheeks would always bring a tear to his eye and a smile to his lips. Macen was truly the Sunshine in his life, and we will be forever grateful that he knew him.

Steve was the 6th child of John and Lidia Kovacs, but the first to be born in Canada, all five of his older siblings being born in Szendro, Hungary. He was born on May 1, 1930, “in a farmhouse, across the road from the jail”, and spent his early years in Raymond and Hardieville, finally moving to the family farm in Shaughnessy in 1939. Steve worked on the farm, and in the coalmines when he was younger, then worked for AGT for 27 years, before retiring at the age of 50.

Steve and Mary spent many hours at Hungarian dances and picnics getting to know one another, before getting engaged, then marrying on November 19, 1953. They were both incredibly fortunate to spend 67 years together.

Steve always had a strong work ethic, building many residences, including his own. He enjoyed snow-skiing, snow-mobiling, water-skiing, and taking care of his yard, in his younger years. He loved all the pets he said he didn’t want, with a passion. He was incredibly close with Taffy, his best friend whom he took everywhere in his old truck to go building. He loved Honey and Ginger, and even called in sick to work when one of them was in labor with her puppies. He loved watching his grand-daughter Brenna, ride Angel and Diamond, and talked about his own childhood, and stories of riding horses into town from the farm in Shaughnessy. In his latter years, he doted big on Tucker “Tucky-boy”, and Penny and Mutchka, and fooled no one with his feigned indifference.

Steve and Mary travelled together, going across Canada, Europe, Hawaii, Asia, Australia, New Zealand, California, Nevada, Florida, Texas, and Tennessee. He loved his trip to Disneyland, and to be able to see it through the eyes of his grandchildren. He looked back with fond memories to his trip to The Grand Ole Opry, Dollywood, and Graceland, and his love for country music was unsurpassed. (Don’t even try). Steve enjoyed going for coffee with his coffee buddies and playing “Bumps” with family.

Steve was predeceased by his sisters and brothers; Margaret, John, Joe, Lydia Toth, and Rose Melnyk. He is survived by his brother, Andrew (Carol) Kovacs, of Lethbridge.

Our family would like to thank Arnold, who gave new meaning to the word “friend”, over the past eight months. Arnold was very special to Steve, and one can only imagine what it would have been like to be in “lock-down” in a new and unfamiliar place. Arnold went above and beyond to make things easier for Steve, and his caring and concern for him will not easily be forgotten.

Steve made his mark (and his opinion) known wherever he went, and he will be deeply missed by all who loved him.

A private family Celebration of Life will be held at a later date.

In memory of Steve, please take time to listen to “Rainbow” by Kacey Musgraves, reminisce, and send some love his way. It was one of his favorites.

In lieu of flowers, donations in Steve’s name may be made to an animal rescue or shelter of your choice.