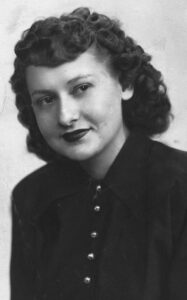 Mrs. Lillian Tyniwsky of Lethbridge, formerly of Windsor, Ontario, passed away peacefully on Thursday, November 5, 2020 at the age of 94 years.

Lillian was born in Theodore, Saskatchewan on November 21, 1925 to John and Kate Ostapovitch. She was the third eldest of seven siblings and was raised on a farm in Theodore. From there the family moved to Insinger, Saskatchewan and once again in 1939 to Windsor, Ontario where the family settled, and Lillian attended high school. Lillian worked at the Singer Sewing Machine Shop in Leamington, Ontario where she developed a love of sewing and needlework. Later during WWII she worked for Champion Sparkplug in Windsor.

In 1953, Lillian married Jerry Tyniwsky and soon after gave birth to daughter, Emily. She stayed at home to raise her daughter, and later returned to work as a cook and a waitress. She loved cooking Ukrainian food, chocolates, playing the mandolin and visiting with relatives. Her favorite songs were “Down In The Valley” and “You Are My Sunshine”. After her divorce in 1996, she moved to Lethbridge to be closer to her daughter.

Our family would like to send a heartfelt thank you to the West Highlands Assisted Living Staff for all of the care, love and compassion shown to Lillian during her time there.

Gone but never forgotten she will be dearly missed by her family and nieces and nephew’s who all called her Aunty Lily and Lal.

A Memorial Service will be held at a later date.