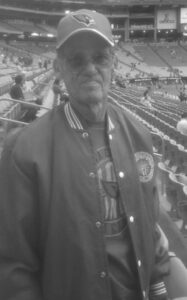 Mr. Robert “Bob” Pricey Wilcox, beloved husband of the late Mrs. Kevah Wilcox, passed away on Thursday, November 19, 2020 at the Chinook Regional Hospital at the age of 78 years.

Bob was predeceased by his wife Kevah in 2019, his sister Parnell in 2020 and his parents Price and Thelma.

Bob was born and raised in Swift Current, Saskatchewan where he started his 41 year career with CP Rail, Signals and Communications (Sept 1, 1959 – October 1, 2000). Bob was proud that both his sons also chose the railroad as careers, maintaining 4 generations of Wilcox’s with CP Rail. Following his retirement, Bob drove crew bus for Hallcon Crew Transport, transporting train crew personnel for many years.

Being a signal maintainer took Bob and Kevah to various towns and cities with Gleichen being where they settled and raised their children. Bob was active in baseball and hockey as a player, coach and referee for many years in both Gleichen and the Siksika Nation where many friendships were made. He served on the Gleichen Town Council for 8 years and Fire Chief for many years. Bob and Kevah moved to Coaldale in 1993 where Bob retired, but Gleichen was always home.

He enjoyed hunting, sports, getting together with family and friends and his beautiful yard. He particularly enjoyed going to the farm to help Jana and Darren with harvest.

The family would like to thank the staff at Chinook Regional Hospital and St. Mikes PARP Unit for their care and compassion given to Bob over the last 6 months.

At Bob’s request, he will be privately remembered by family and friends.