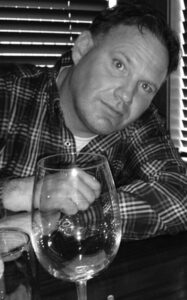 Warner Daniel Skelly Steinke passed away on Saturday, November 21, 2020 as the result of a tragic accident at home, on his land. Beloved son of Warner and the late Joy (Skelly) Steinke, beloved brother to Alexandra and Claudia Steinke, and cherished uncle to Ryker Steinke.

Warner was named after his dad and both his grandfathers, and he happened to be born on his Grandpa Skelly’s birthday, January 24th. Even though he never knew his grandpa, above all else, he inherited his same kindness and decency.

“Little Warner,” as he was sometimes called, or “Tank,” a nickname dad gave him that stuck, was definitely his father’s son, and that could be both a good thing and a bad thing. With mom’s charm, her eyes and her smile, he was often quietly entertaining with his dry, blunt sense of humour, easy to love, but not always easy to get along with, and quick to laugh.

As mom used to say, “When Warner was good, he was really good, but when he was bad he was horrid.” And his laugh was warm, oh so warm, and welcoming.

When he was little, he was always moving, always busy, so much so that our mom took him to the doctor once wondering if he might be hyperactive. As they sat in the waiting room, another little boy came in and according to mom, was literally climbing the walls. Warner, well behaved and curious, sat quietly watching in amazement at the other boy’s antics. When they were called in for their appointment, our mom actually apologized for wasting the doctor’s time explaining that, after watching the boy in the waiting room, she realized she made a mistake.

People who really know Warner have said how truly likeable he was, that he had the biggest heart a guy could have. Oddly enough, even though he knew how to fight from his hockey days he was often the peacemaker among his friends and between his two sisters. You could run into him on the street, and even if you hadn’t spoken to him for months, he talked to you as if he’d just seen you the other day.

Warner loved riding horses with dad, quadding with his nephew and cutting acres and acres of grass at the farm, as he was very particular about the yard, always wanting it to look nice.

School was never Warner’s thing, but he was so smart in ways that have nothing to do with books. Our brother knew every back road (thanks to dad) from Calgary to the border, northern Alberta, northern British Columbia and wherever the oil patch would take him.

You never got lost if you were with Warner out in the middle of nowhere. In fact, if you were looking for someplace or someone, especially in Southern Alberta, just call Warner. If anyone could find them, he would. He once came home after weeks working out of town and found our mom at the doctor’s office when she hadn’t even told anyone she would be there. When he strolled in nonchalantly, she looked up, laughed and just shook her head.

Claudia and I were proud to introduce him to people because he just had a way about him that made you feel proud. He was unfailingly polite to strangers, considerate of all people (maybe except sometimes towards his sisters), quite happy to chat, and would shovel the neighbor’s sidewalks every time he shoveled our own.

Warner was the one who gave you his chair and held the door for you. If he saw someone struggling to open a heavy door or gather up a spilled bag of groceries, he was right there. No one had to ask him to do it. So many times, we’d be walking and I’d be looking one way and he’d be looking another. If I saw someone struggling, all I had to say was: “Warner………….”. He would turn his head in my direction, see what I was looking at, and off he’d go to help.

He really did not like conflict and this showed itself in the way he would always try to lighten the mood, especially if Claudia was arguing with someone. It’s a family joke that Warner does everything he can to avoid going to places like Tim Horton’s Drive-Through with Claudia because she can be sharp, and has no patience with poor service quality, while often expressing amazement that not everyone knows what a serviette is. He cringed every time.

He was the one who ran to help the elderly man who got his wheelchair stuck on the curb, and the one who I always felt safer with somehow. I may have been his safe harbour sometimes, but he was mine too. Going to a store with Warner was something I enjoyed because I didn’t have to figure out parking or what is the best way to get across the parking lot. He would always stand close to me to make sure I got in and out of the car, confidently grasping my hand as we walked into and out of the store. That’s our brother.

Warner would probably tell you that his most important role ever was that of uncle. And he adored his nephew, Ryker Manuel Warner Steinke. Warner once said of Ryker’s birth, “I didn’t see that one coming…” But when Ryker came, Warner tried hard to do what all good uncles do. He showed up.

He showed up in the delivery room, to hold my hand even though he really couldn’t handle the sight of blood. Having little to no experience with babies, he made it clear to the doctor that he didn’t want to go into the operating room until he absolutely had to, he didn’t want to hold him, and please don’t ask him to cut the cord. But from the first time Warner held his nephew in his arms till the last conversation he had with Ryker the night before his accident, this boy was his best buddy, his co-pilot, his girl-magnet, his confidante, his pride and his joy.

‘ONCLE’, as Ryker called him, was not known for his calmness or patience, but he showed up on good days and bad, he showed up for the fun stuff and never turned down a chance to hit the road with Ryker, to try a new place or activity, to do Lego together or sneak out to grab Taco Time.

Warner laid the foundation for his nephew’s future driving skills travelling down the backroads with Ryker in his lap, steering, just as our dad did with him. Ask Ryker today what his Oncle taught him when driving and he says six simple words: “Keep your eyes on the road.”

Warner and his lookalike nephew made the best of the almost six years they had to get to know each other, as they embarked on many little adventures just the two of them could share. Even though Warner’s time on this earth was unexpectedly short, and his personal struggles clouded way too many of his days, he loved us with all his heart.

And we love and adore him. Always.

There’s an old proverb that goes like this: “When you were born, you cried and the world rejoiced. Live your Life in such a manner that when you die, the world cries, and you rejoice.”

I imagine him waking up in heaven, wondering what is going on, where he is, all of the sudden he finds himself wondering why he feels so calm…no anxiety, no pain, his beat-up shoulders and aching back don’t hurt anymore. His brain isn’t foggy anymore. Someone is sitting beside him as he wakes, I don’t know who, maybe his good friend Bryan, maybe Grace and Charlie, maybe Uncle Chris or Auntie Ruby or maybe all of them. But whoever is there beside him, Warner knows them immediately and he can’t believe his eyes. They talk and laugh and hug and joke as if they have never been apart, and then one of them shows him the door.

He looks back, confused, but they keep motioning for him to go forward. He slowly follows the path at his feet. When he looks up, he can see someone else coming toward him in the distance, but he still can’t decipher who that might be. Closer….Closer. All of the sudden, he knows, He UNDERSTANDS and the RELIEF on his face….

RELIEF…Absolute relief, tears of JOY, and pure uncomplicated happiness that has been lying dormant for years. Mom and Warner, together again.

We love you, Tank.

Humble and Kind by Tim McGraw is a song that Warner listened to often and it so perfectly speaks to the person he was. In his honour, if you could take a few minutes in your day to listen and reflect, we know Warner would love that.

A private evening to Honour Warner will be held at his cabin in January. Condolences, memories and photos may be shared and viewed on Warner’s obituary at www.McInnisandHolloway.com.