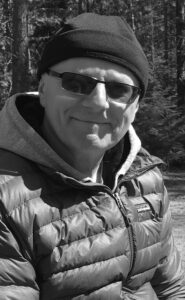 BRENT JOHN MOSLEY, beloved husband and soul mate of Maria, passed away with her by his side after a short yet valiant battle with cancer, on Saturday, December 5, 2020 at the age of 60 years. Surrounded by family, Brent steadfastly hung on to say goodbye to his mom Verna (Art) and his brother Brad, Blake (Lise) and his many cherished nieces and nephews before ‘climbing on’ to greater heights.

Brent was born in Lethbridge on October 27, 1960, living the earlier part of his life in Winnipeg, where he also led firefighting efforts in the northern Manitoba woodland. He returned to Alberta to continue his education and while in University, met, pursued and finally caught Maria. They were married in their beloved mountains, a continuing passion of both.

Following graduation, with degrees in Outdoor Pursuits (University of Calgary) and Education (University of Lethbridge), Brent secured a teaching position with Lethbridge School District #51. It was here that he was able to share his love of the outdoors with youth at risk. Over his 20 plus years teaching, he introduced students to backpacking, cycling, climbing and winter camping to name a few. His greatest joy was taking small groups of students and guides on the character-building canoeing and backpacking adventure of a lifetime to Bowron Lakes.

Brent’s love of the outdoors also extended to teaching those skills to several family members and friends where those lessons thrive today. His appetite for climbing led him on several worldwide successful climbs, most recently peaking Mount Kilimanjaro with his best friend Mike Falkenberg. If he was not on a mountain, Brent could be found on the open road. His love for motorcycling included trips to Alaska and Vegas in the open air and were cherished memories. His insatiable drive for fun and adventure also included water sports, toy trains, Smurfs, minions, several fur babies and a successful coast to coast bike trip across Canada. Brent and Maria’s most recent adventures were just unfolding in the Kootenays as together they acquired a beautiful home that would house all family and friends that arrived as well as Brent’s diverse toy collection.

Brent enjoyed the work of avid outdoors man, John Muir, and would like us to leave you with these words: “Climb the mountain and get their good tidings. Nature’s peace will flow into you as sunshine flows into trees. The winds will blow their own freshness into you, and the storms their energy, while cares will drop like autumn leaves.”

Brent was predeceased by his father Jack, grandparents Kay and Ernie Mosley, and Mildred and Lyle Leffingwell.

A trust fund will be established in Brent’s name to help continue to support efforts to provide disadvantaged youth the opportunity to participate in outdoor activities.

A celebration of Brent’s life will be held when it is safe for all.

While Brent’s life was cut short, it was a life well lived.