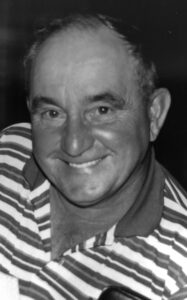 Russell H. Mummery passed away peacefully on December 4, 2020 in Lethbridge, AB at the age of 88.

Russell (Russ) (Rusty), our Dad, was born in Brandon, MB, the youngest of 9 children, to Russell Sr. and Winnifred Mummery (Huntley) who raised their family in Minnedosa. Dad married Mom, Ruth (Roach) in 1952 and together they raised their 3 children in the Brandon area before returning to Minnedosa in 1988. Dad and Mom moved to Lethbridge AB in 2001 to be closer to their daughters Valerie and Susan.

Even as a young lad Dad was entrepreneurial minded, delivering groceries around town with his beloved Shetland cart ponies Babe and Enid. He could often be found in winter on the ice honing his hockey skills. Dad played competitively for the Brandon Junior Wheat Kings and billeted players from the Wheat Kings in later years.

The Mummery family were railroaders, with Russell Sr., Dad and his brothers, several nephews and son Brad all working for CP Rail. He started out as a fireman shovelling coal on one of the last steam engines in the Brandon district. He then trained as a machinist. Dad left the railroad for a time but later returned as a brakeman; retiring as an engineer in 1991.

Many will remember Dad from his work as an award-winning meat cutter at brother Bob’s Victoria IGA in Brandon. It was mesmerizing to watch him make his signature beef sausages which were very popular with East enders.

As a capable jack of all trades, Dad was able to find satisfaction in numerous endeavors. He and his brothers built a house for his parents which stands today on Douglas Street in Brandon. Dad was always doing some kind of DIY in his younger years whether it was in wood working, building, or whatever he turned his hand to. He raised cattle and hogs with brother Bob. He obtained his private pilot license in the 1960s, fulfilling a long held personal dream.

An avid outdoorsman, Dad enjoyed duck and goose hunting, but fishing was his passion. He spent countless hours on Manitoba lakes and rivers; often travelling north with buddies for week long excursions complete with shore lunches a la ‘chef’ Mummery. He had a cabin at MB Lake of the Prairies in later years and welcomed one and all to join him out in the boat. He proudly achieved Expert Master Angler status in Manitoba, earning a Silver Badge for having caught five species of trophy fish.

He loved to read, play cards, golf, bowl, puzzles of all kinds and took pleasure in the simple things in life.

Dad was community minded; always there to lend a hand to friends and family. He loved Minnedosa and enjoyed volunteering with the local Ducks Unlimited and the 100th Anniversary homecoming celebration in 1983. For many years Dad was a dedicated blood donor and was honored with an award from the Lieutenant governor for giving over 50 times.

Dad’s greatest joy was spending time with Mom, their 3 children, 5 grandchildren and two great grandchildren, along with his large extended family and many friends.

Dad was predeceased by his parents and siblings Miriam, Noreen, Phyllis, Melville, and Marjorie, and several nieces and nephews.

There will be no funeral service at this time; a Celebration of Life will be held at a later date.

One Condolence for “MUMMERY, Russell”