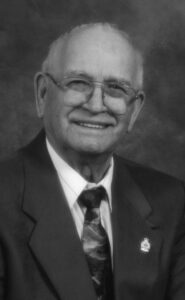 With great sadness we announce the passing of FRANK BENCI JR of Lethbridge, beloved husband of Helen, who passed away at the Chinook Regional Hospital, with his family by his side, on December 10th, 2020, at the age of 100 years.

He is survived by his wife of 74 years, Helen, and their children; John (Leslie) Benci of Winnipeg, and their son Brian (Heather) Benci; Shirley Coughlan and her children Paul (Sarah), Glen (Carmen), and Kristy (Debb); Dennis (Sue) Benci of Carmangay and their daughters Julie (Paul), and Delaine (Luigi); Dianna (Wendlin) Wandler of Lethbridge and their daughters Jody (Rich), Laura (Clayton), and Kerry (Shawn).

Frank is also survived by twenty great-grandchildren, who were always the love of his life.

He is predeceased by his parents, sister, brother and many other family and friends.

Frank was born in Zavar, Czechoslovakia, on January 17th, 1920. He came to Canada at the age of sixteen with his mother Amalia, sister Rosie and brother Louis, to join his father Frank Sr. Frank joined the army in 1941, where he served for five years. After returning from the war, Frank and Helen were married in 1946. They began farming in the Picture Butte area, and expanded to Carmangay, all the while raising their four children.

Frank and Helen enjoyed travelling to numerous places. He enjoyed camping, fishing, and hunting. He loved partying with many friends and family. He enjoyed farming for many years and after retiring in 1984, he still remained active helping his families on their farms.

Frank was one of a kind and he will be forever remembered, loved and missed, but never forgotten.

A Funeral Mass will be held on Tuesday, December 15, 2020 at 1:00 P.M. A Mass will be live streamed and may be accessed via Frank’s obituary on the Cornerstone website.

In lieu of flowers, please make a donation in Frank’s name to the charity of your choice.

One Condolence for “BENCI, Frank”